Government to pay for Pissouri mess 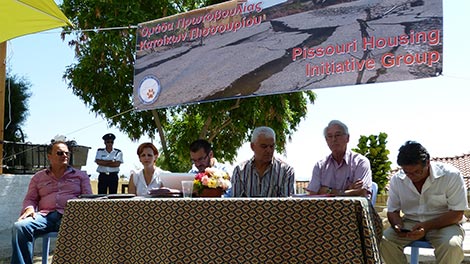 INTERIOR minister Socratis Hasikos attributed responsibilities to surveyors on Thursday as regards damages to homes in the Limnes area of Pissouri due to land slippage and said that the government will pay for their mess.

Speaking at the House interior committee, Hasikos said that surveyors made “frivolous approaches” when studying on the suitability of the soil in the area before building houses, and that now the government “is called to address the issue”.

“Pissouri houses were damaged because the subsoil somehow was not solid enough to build on safely,” Hasikos told MPs, “so we got to where we are today, as many houses have been damaged”.

Limnes residents had been urging the government for several months to seek solutions to prevent the 60 homes from collapsing, the House interior committee had heard in September.

An earlier announcement by the interior ministry had said that the land slippage was mainly due to the underground water, in combination with the geological conditions of the area. The ground, up to a depth of 16 metres, is made up of loose material that came from past landslides in the wider area, and the ground morphology does not allow the water to escape.

“The area from the name alone ‘Limnes’ according to me should have been prohibitive to someone to proceed with building, unless they take all those engineering measures to ensure that the infrastructure is built on solid ground,” Hasikos said.

Asked whether the government bears responsibility, he said that when that area was designated as residential there was no legislation to compel the state, or the interior minister, to conduct surveys before it is classified as residential.

“A (specific) law was voted at a later stage. The surveyors had then, as they do now, the responsibility to conduct studies whether what is about to be built is safe,” Hasikos said. “There are responsibilities, yes”.

He said that his ministry is waiting for a report to see how the government can help the affected residents. He added that state services were allocated a budget to take preventive measures and at a later stage to safeguard the homes.

As regards restoration work, he said that “we are talking about a lot of money, but I cannot say numbers at the moment”.

MPs however, attribute responsibilities to the government as well.

Committee chairman Yiannos Lamaris said that the situation was created due to insufficient actions and surveys, but also with the contribution of the state that issued the relevant permits.

He agreed with the government’s move to identify the problem through a scientific study but also through satellite images.

Lamaris said that the costs for the restoration of the whole area to the degree that it is no longer deemed as dangerous will be very high, probably up to €20m.

He added that on Monday officials from the Limassol district office will visit the area and that Hasikos pledged to visit the area at a later stage and meet with the residents.

DISY MP Andreas Kyprianou said that the problem lies in that the state did not inform surveyors properly and in time of problems of the subsoil in the area, and surveyors, when the foundations of the houses were been dug, did not take any measures to address loose soil and cases of accumulation of large amounts of water.