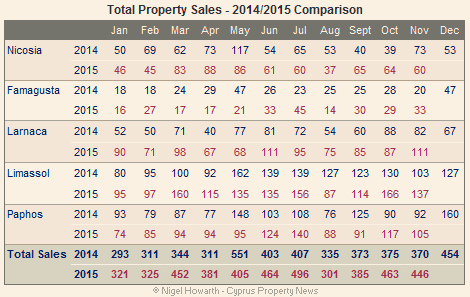 THE TOTAL number of Cyprus property sales during November rose 21% compared with the same period last year according to official figures issued this morning by the Department of Lands & Surveys.

During November a total of 446 contracts for the sale of commercial and residential properties and land (building plots and fields) were deposited at Land Registry offices across Cyprus, compared with the 370 deposited in November 2014.

With the exception of Nicosia, where sales fell 18%, they rose in all other districts.

Property sales in Famagusta rose 65%, while sales in Larnaca rose 35%. Sales in Limassol and Paphos rose by 33% and 14% respectively.

Property sales during the first eleven months of 2015 are up 9% compared with the same period last year with the number of properties sold reaching 4,439 compared to 4,074 in 2014. The number of sales in Nicosia and Famagusta remain unchanged, while sales in Larnaca, Limassol and Paphos have risen 32%, 8% and 3% respectively.

However, non-performing real estate loans remain a serious challenge to the market. According to KPMG’s Property Lending Barometer 2015, Cyprus has the highest number of impaired real estate loans of all the European countries. Almost 70% of its real estate loans are non-compliant (59% serious and 11% minor impairment).

The number of properties purchased by Cypriots in November rose 11% compared to November 2014, with sales reaching 308 compared with 227 during the same period last year.

Although sales in the mainly business and commercial districts of Nicosia and Limassol fell by 24% and 2% respectively, they rose by 300% in Famagusta, 47% in Larnaca and 8% in Paphos.

Sales rose in all districts with Paphos leading the way with sales up 105%. Sales in Nicosia rose 58% and those in Limassol rose 23%, while property sales in Famagusta and Larnaca rose by 9% and 7% respectively. 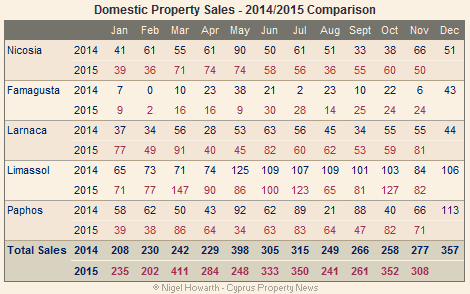 Domestic sales during the first eleven months of 2015 are up 8% compared with the same period last year with sales reaching 3,225 compared to last year’s figure of 2,977.

Property sales to the overseas (non-Cypriot) market rose 48% in November compared to the same period last year with 138 properties sold compared with the 93 sold in November 2014.

While sales in Famagusta fell by 36%, they rose in all the other districts with Limassol leading the way where sales increased by 189% compared with November 2014. Sales in Nicosia rose by 43%, while sales in Paphos and Larnaca rose by 31% and 11% respectively. 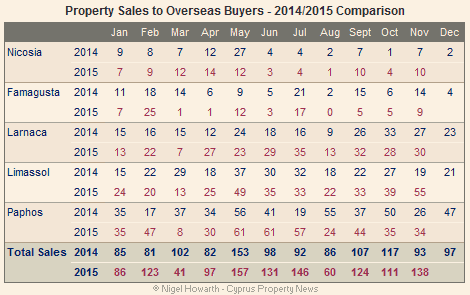 During the first eleven months of 2015, property sales to non-Cypriots have risen 11% compared to the same period last year, with the number of sales rising to 1,214 from last year’s figure of 1,096. 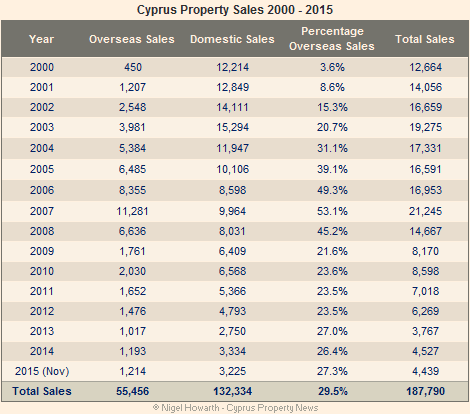