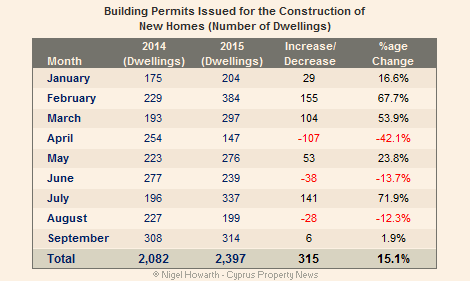 THE NUMBER of building permits authorised in Cyprus during September 2015 stood at 407, the same as the number authorised during the same period last year, according to the latest figures from the Cyprus Statistical Service.

During the period January – September 2015 the number of building permits authorised for both residential and non-residential projects has fallen by 0.6% to 3,693 compared with the 3,714 authorised in the same period last year. However, their value has risen by 20.6% to €764.1 million and their area has increased by 14.8% to 658,427 square metres.

The 228 residential building permits approved in September provided for the construction of 314 new homes comprising 127 single dwellings and 187 multiple dwelling units (such as apartments, semis, townhouses and other residential complexes).

This is an increase of 1.9% compared with September 2014 when building permits were issued for the construction of 308 new homes.

During the period January – September 2015, the number of dwelling units for which building permits have been issued has risen 15.1% compared with the same period last year.