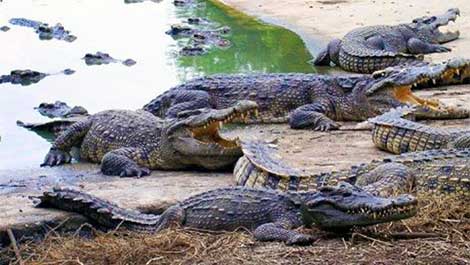 THE PROPOSED crocodile park near Psematismenos in the Larnaca district is in the news once again, with Green Party chairman Giorgos Perdikis alleging that political pressure was put on the Environment Department by the Agriculture Minister to allow its operation.

Speaking after a House environment committee meeting, Perdikis said that none of the 10 advisors from various government departments and other organisations gave a positive view but that the minister put pressure on the environment authority to issue the permit.

In 2014 the House Environment Committee found the whole idea ‘very suspicious’ while Environment Commissioner, Ioanna Panayiotou, said that Nile crocodiles are a protected species under EU law and that the proposed farm posed a threat to the environment.

In July last year the Animal Party staged a protest outside the Ministry of Agriculture and the Environment, supported by residents of Psematismenos and Tochni who had refused to consider the matter when it was discussed in 2014.

The reasons behind this apparent about-turn by the Cyprus Environment Department are not known.

The crocodiles are to be sourced from a crocodile farm at Moshav Fatzael in Israel that is no longer profitable after selling their skins was banned. The farm was closed to tourists years ago and local councils have demanded its evacuation.

In November last year The Times of Israel reported that a small crocodile had been found in an Israeli settlement, the head of Jordan Valley Regional Council, said: “For safety reasons we don’t want them around. I really don’t know what can be done with them and if there is any country willing to take in more than 1,000 crocodiles.”

In 2011 dozens of crocodiles escaped from the farm, and were caught only after a pursuit lasting several days, during which there was a fear that they would reach Jordan. Council head David Elhayani, who participated in the pursuit, said that he was afraid of additional escapes from the site and that “The 1,000 crocodiles located there constitute a real hazard to residents of the region”.

According to the report Gadi Bitan tried to establish a crocodile park in Cyprus, but had yet to receive the relevant licences.

Following the Environment Department’s decision to issue a licence, the park only needs the permission of the town-planning department to go ahead.