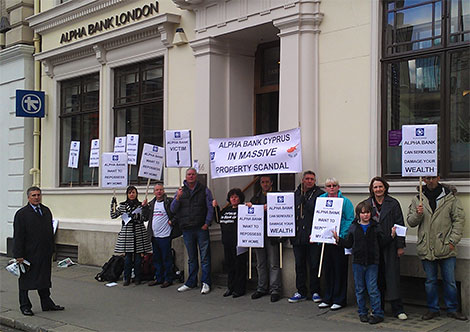 WE HAVE received news that a number of notices have been issued to home buyers living on the the Anarita Sunrise 1 development in Paphos and another home buyer living close whose properties were built by bankrupt property developer Yiannis Liasides.

The plaintiff in the case is Alpha Bank Cyprus that granted loans amounting to somewhere in the region of €3.7 million to Liasides, which were never repaid.

We understand that the bank is asking the court to overturn the Land Registry’s decision to transfer the properties to their purchasers. It also contesting that the ‘trapped buyers’ law is unconstitutional and that the Land Registry is acting illegally. Title Deeds for the properties have been issued in the name of the liquidator and we believe that Liasides Anarita Sunrise 1 development is the only one that has been fully completed.

Although the bank is not asking the court to allow it to repossess the properties, such a request may follow if the court rules in the bank’s favour.

The court’s decision to issue notices makes a complete mockery of ‘trapped buyers’/’hidden mortgage’ law that is supposed to enable the transfer of properties regardless of whether the developer was insolvent, but it seems that the Alpha Bank Cyprus’ legal team may have found a loophole in the law?

Furthermore, the properties at Anarita Sunrise are ‘primary residences’ (not secondary of holiday homes) and a number of banks have given assurances that they would not repossess primary residences. One of the purchasers I spoke with earlier who received a notice confirmed that she had paid Liasides in full for her property and owes the company no money.

The Liasides ‘saga’ will be familiar to regular readers of Cyprus Property News.

In 2007 it emerged that that Yiannis Liasides had mortgages on the land on which his company was building and was in serious financial straits and the company ceased trading without repaying his debts leaving in his wake some 250 purchasers in 14 plots who bought properties from his company without their Title Deeds.

In 2011 Alpha Bank Cyprus filed applications at the Land Registry to auction eight of the fourteen plots of land that were owned by the company at Anarita, Pegeia, Mesa Chorio and Armou. At that time it was reported that Liasides made no mortgage payments since 2002 on a plot at Anarita – and since then the amount owed to the bank probably exceeded the value of both land and properties that he had built and sold to unsuspecting purchasers.

The Cyprus Property Action Group (CPAG) assisted a number of Liasides clients lodge cases at the European Court of Human Rights against the Cyprus Government for not protecting their property rights and a question were raised in the European Commission.

In December 2011 an on-line petition was launched to stop the Alpha Bank’s applications. Over the next few weeks, the petition garnered 1,179 signatures and I was interviewed by Rosie Charalambous for the CyBC radio programme ‘Round and About’ about the problems surrounding Title Deeds and unpaid developers’ debts.

This callous act by Alpha Bank Cyprus, which is due to its own mismanagement, negligence and incompetence, is most probably motivated by money. Court cases against the bank are pending alleging that it mis-sold Swiss franc loans to many home buyers.

I suggest that anyone with an account at Alpha Bank Cyprus should take their business elsewhere.

The case has been adjourned until 20th April.

A 71.7 metre tall, 16-storey tower called 'Mandarin Park' comprising a mixed development of commercial and residential properties is to be built in the Germasogia area of Limassol.
Read more