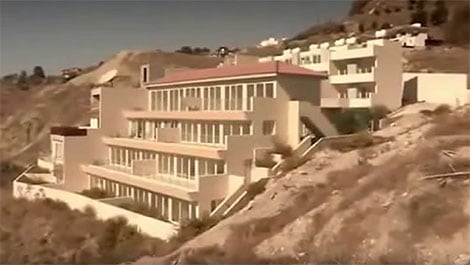 SIX YEARS after the Sunday Mail first highlighted their plight, distraught homeowners in the unfinished and paradoxically named Paradise Hills estate in a Paphos village remain without their Title Deeds. The developer has long gone bust, forcing them to struggle with officials for redress.

The 49-unit development in Marathounda is essentially a ghost estate. Only three families live on site. The rest of the flats and villas stand empty, their owners abroad, while weeds choke entranceways and deepening cracks appear in some of the structures.

Pavements have buckled, caused by a water drainage pipe installed on a hill behind the estate through which water pours endlessly during the winter months. An access road, mostly paid for by the owners, has never been completed.

“We are stuck in Cyprus. Prisoners. It’s like waking up in the dark with a noose around your neck and it’s getting tighter and tighter,” said Tracey Hames.

She and her husband Lance paid around €240,000 for their three-bedroom villa, handing over the last instalment just a few months before the developer MDB Properties Limited was dissolved. The company went into provisional liquidation in 2009.

All the couple’s money is tied up in the property. Tracey has suffered so much stress that she has been hospitalised and is now on lifelong medication.

A weathered sign at the entrance to the estate adds insult to injury. The billboard features an artist’s impression of a finished development with the starting price of a place given in long-defunct Cyprus pounds. Next to the sign proclaiming Paradise Hills someone has scrawled ‘Nightmare Hills’.

The Hames are desperate to find ways to complete their homes and get hold of their Title Deeds. Her husband said no owner has ever been contacted by any authority to explain what is happening at the site.

“We are in an ever increasing state of worry as the site itself is deteriorating. Most of the properties were sold to British nationals and after eight years struggling, we should have an administrator in charge of this mess by now,” said Lance, adding that their villa was worthless without Title Deeds and sitting on an unfinished site.

“Authorities fob us off and are not interested. We have been told by our lawyer that the bank won’t deal with us as it’s going through a legal process, but there must be someone at the Bank of Cyprus who can help.”

Louise Zambartas is the lawyer for 11 of the owners at the site.

She believes that the Entrapped Purchaser’s Law passed in September 2015 and aimed at helping homeowners obtain their Title Deeds should help her clients ‘hugely’ and they are taking advantage of that.

The law was passed to sort out the mess which saw thousands of mainly expat homeowners, who had paid in full for properties in Cyprus during the building boom in the 2000s, left without Title Deeds either because the property was mortgaged by the developer, or the state could not go ahead with the transfer because of outstanding taxes.

The situation at Paradise Hills is especially problematic.

“The problem here is that no separate titles exist as there is no final approval certificate and the developer never finished it,” said Zambartas. “I feel desperately sorry for them and hope that the bank and all those involved will do what they can to help.”

Zambartas said that if the bank were willing to contribute something towards finishing the site so that deeds could be issued, this would benefit them in the long term when units were sold in the future.

“If the bank was on board, it would help so much and I can only hope that this will be the outcome.”

According to Zambartas, of the 49 units at Paradise Hills, there are 40 contracts of sale deposited at the Land Registry. Some of the properties are under multiple ownership, for example one person owns five, and two others own two properties each.

John Rowles, 79, is an ex-British Army serviceman, who once served in Cyprus and owns one of the properties. Like the Hames he lives on the site. He paid the equivalent of around €90,000 for his apartment in 2006 and planned a quiet, stress-free retirement. Despite the ongoing problems, he said he still loves Cyprus and wants to stay in his apartment.

“I have my life in Paphos now, I’m a member of a walking group and a book club,” he said.

But constantly on his mind is the lack of progress over the future of his property.

“Nothing at all has changed here. I want the site to be finished and to live normally. I also want something to leave to my children. Nobody finds his way onto this site by accident and some air conditioning units have gone missing.”

According to Hames, so have a number of doors and windows.

Although the owners have been forced to live in a legal limbo for years, there are signs that progress is being made.

After the previous administrator of MDB – One World – withdrew itself, the bankruptcies and liquidations section at the Registrar of Companies were appointed provisional liquidator.

Recent changes to the law mean that the department is now the liquidator and can apply to outsource this work to another registered liquidator, which will speed up the process, according to the head of the liquidation section of the Registrar of Companies and Official Receiver, George Karrotsaki.

“Following some changes to the law, aimed to help clear a backlog of cases the department is facing, we followed the new procedures to become liquidators. In the case of Paradise Hills we managed to do this on 27 May, 2016,” said Karrotsaki. “Under the new procedure, the department, which has hundreds of cases to deal with, can appoint another liquidator, which makes sense to speed up the process.”

He added that if there was no objection raised by any of the creditors, by the end of the year, he hoped a liquidator meeting strict criteria would be in place.

“We will do our best for this case and others,” he said. “We care about people’s misfortune and it’s the government’s policy to find ways to help, which is why there are a number of new laws in place. They are particularly sensitive to foreigners affected, as it can discourage investment. There has been a big mess in the past and this needs sorting out.”

But as the fight for Title Deeds winds on, owners also have more immediate problems to deal with.

Promises by the community leader of Marathounda to finish the access road to the site – part of which the owners have already paid for – have yet to come to fruition.

On top of this, a water drainage pipe which gushes out thousands of litres of water during rainy periods has been constructed on land just above the site and has caused severe damage to infrastructure.

“I’ve been up to the village and asked if they will finish of the road to our complex, we paid for a large chunk of it ourselves,” said Lance. “The muhktah agreed, but then nothing happened. He also said that the drainage pipe was nothing to do with them, but the water board.”

An initial run-off pipe which was placed behind the site was closed off following complaints from Hames and others that the water was eroding the site. However, Hames said that about six months later, an almost identical one appeared close to the site of the first.

The head of Paphos water board confirmed that the local community board is responsible for the pipe, which he said could be “moved easily”.

In the meantime, Rowles tries to remain sanguine over the prospects for the estate, but believes time is running out.

“I believe everything will eventually be sorted out here, but I will probably be dead by then.”

Paradise Hills featured on ITV’s Holiday Homes from Hell in July 2011. The show can be viewed below: