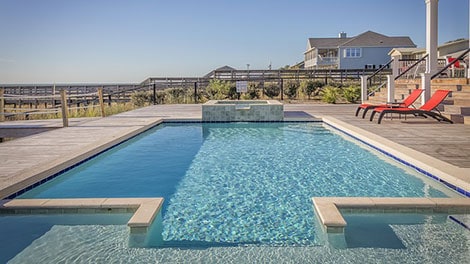 THE REPORT in Phileleftheros earlier this week concerning unlicensed swimming pools and petrol stations prompted an announcement by the Interior Ministry; it seems that the swimming pool laws and regulations may soon be revised as part of the package to reform Cyprus’ complex and time-consuming planning system.

In summary, the announcement from the Interior Ministry advised that a bill to amend the existing legal framework and regulation of swimming pools has been drafted and forwarded to the Attorney General for legal vetting.

However, during the vetting process it was identified that some of the provisions in the draft bill already existed the Streets and Buildings Law and Regulations; as a consequence the draft bill was returned to the Interior Ministry for further work.

According to the ministry’s announcement, two pieces of legislation will cover:

In 1992 Cyprus introduced a law that recognised two types of pool – ‘private’ and ‘public’.

A swimming pool shared by more than one family (such as those shared by those living/holidaying in apartment blocks and other private building complexes) are classed as ‘public’ and subject to the same laws and regulations that govern swimming pools in hotels and tourist complexes.

The regulations for ‘public’ pools include the provision of a lifeguard, showers, male and female toilets, footbaths, etc. (The cost of a lifeguard alone is more than €2,000/month.)

In November 2005 Lakis Tofarides, the Chairman of the Land and Building Developers Association at the time, suggested the following measures should be taken to alleviate the situation.

“The swimming pools in apartment buildings and complexes to be considered private (not public) because the residents and their guests use them. At the same time, residents, in proportion to the number of persons living on the building/complex, could be trained as lifeguards. This means that if there are large families on the building, the number of persons to be trained would be decided accordingly”.

“As far as public pools are concerned, the number of supervisory staff needed (lifeguards, etc.) should be reduced”.

In June 2007, Denis O’Hare, Linda LeBlanc and I met with the Permanent Secretary of the Interior Ministry, Dr Lazaros Savvides, and discussed the problems of the swimming pool laws with him.

In August 2008 it was reported that the Cyprus Government was looking to change the swimming pool laws. However, absolutely nothing happened.

Under these European Standards, which Cyprus should have adopted by March 2009, complexes that share a pool for the use of the property owners, their families and guests are classed as a Type 3 swimming pool, making it subject to different standards than a public swimming pool and would therefore not require lifeguards, etc.

The standard defines ‘public’ pools as “open to everyone or to a defined group of users, not designated solely for the owner’s/proprietor’s/operator’s family and guests independently from paying an entrance fee.”

Question: Did Cyprus implement the European standards for swimming pools?

In 2011 Arlene McCarthy MEP questioned Cyprus swimming pool legal rulings in the European Commission after Paphos municipality took legal action against one of her constituents and others for not having a swimming pool licence for the pool in their holiday complex.

In 2012 a group of residents living at a complex in Kato Paphos had their passports confiscated temporarily for failing to comply with swimming pool regulations.

In January 2015 Phileleftheros reported that the Interior Ministry was proposing a new law to classify swimming pools into five different categories and that the draft of the new law was under scrutiny by the Legal Service. (Yawn)

Light at the end of the tunnel?

Now, in December 2016, we see that swimming pool laws and regulations are once again on the Interior Ministry’s agenda.

We can only hope that the new laws will resolve the problems and costs incurred by thousands of home owners in apartment blocks and other private building complexes whose shared pools are currently deemed to be ‘public’.

However, given the Interior Ministry’s abysmal performance to resolve this matter over the past ten years (and more) I don’t hold out much hope.