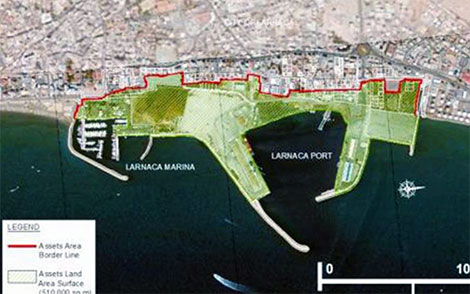 THE TRANSPORT Ministry has unveiled its new plan to attract a strategic investor for the development of the Larnaca port and marina and includes berths for Giga yachts and cruise ships according to a report in the Cyprus Weekly.

Named Amphitrite, after the sea-goddess and wife of Poseidon, the plan analyses in detail the present conditions as well as the legal, economic and technical issues for the proposed development framework.

The study was undertaken by ERNST & YOUNG and SALFO and presents three different development strategies with investments ranging from €145 million to €235 million.

According to the report, the present infrastructure of both the port and marina are in poor condition, and major restructuring will be required.

The study proposes the substantial revision the city plan to facilitate the development of projects desired by both the state and the city council and has suggested increasing the building coefficient from 30% to 40%.

The study has outlined the need for a suitable road network which will connect to the existing one but with priority given to pedestrians and easy access to the Phinikoudes promenade and bicycle lanes.

The report also makes clear the commercial use of the port and has designated the western part of the area as such pending an environmental impact study.

The area available to the investor is 510,000 square meters and stretching from the port to the marina.

The report, based on local and international property markets with regards to size and competitiveness has recommended the construction of a large number of small to medium-sized apartments, a few luxury villas, a hotel, offices and a commercial centre

Despite the saturation of the Larnaca real estate market, interest in sea-front properties remains high especially if one keeps the government’s citizenship for investment policy.

Larnaca also has the advantage of not being a victim of seasonality like other tourist areas on the island, safety and its close proximity to the airport.

The first development strategy includes the creation of a marina to hold 750 50-metre yachts, 50-60 mega and Giga yachts and a 300m cruise ship.

The second choice provides 600 50-metre yachts, 25 mega or Giga yachts and a 250m cruise ship, while the third choice is identical to the second but has place only for 10-15 mega and Giga yachts.

Although the prevailing political tensions in the Middle East have diverted cruise ships from Israel and Lebanon, the study is confident that the close proximity of the Larnaca port to the old town will and permits short trips around the island to archaeological sites etc.

At the same time, the large distances between destinations favours the creation of berths for 100m mega and Giga yachts in order to stock up on supplies and for refuelling.