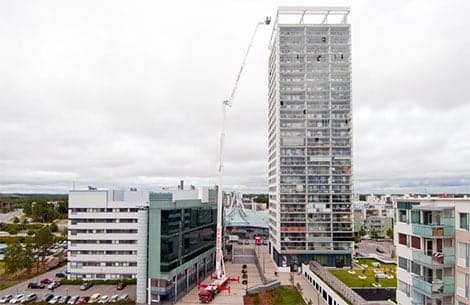 AUTHORITIES in Cyprus have been reassuring that despite the influx of tall buildings scattered across the country with skyscrapers planned in Limassol, fire safety measures are firmly in place, following concerns rising from the London tower block blaze that killed many people.

The deadly fire at Grenfell tower in the early hours raised serious questions after it spread rapidly engulfing the 24-storey housing block.  Prime Minister Theresa May has ordered a public inquiry, while British media reports outline the cladding used in the building has been banned in the US since 2012.

Closer to home, head of the House interior committee Eleni Mavrou, said the incident highlighted the need to bring fire safety laws in Cyprus up to speed so as to avoid any similar incidents, particularly while Limassol is boasting eight major projects set to be completed in the next few years, with seven permits currently being evaluated.

For instance, a 37 storey skyscraper at 170 meters high, the One Residence, is set to be the tallest residential seafront tower in Europe.

Fire services spokesman Andreas Kettis, however, said the measures Mavrou wanted approved in parliament within the next two weeks have already been in place for years.

“Many measures are there to prepare in the case of a fire, such as having water systems or ensuring power won’t be cut off,” Kettis told the Cyprus Mail.

Additionally, there are pre-emptive steps taken from the planning stage such as proper material that will prevent a fire from spreading too easily.

“We don’t let anything slip past us,” Kettis said.

The Cyprus scientific and technical chamber (Etek) district secretary in Limassol Yiannis Kakoullis, however, said he did not feel so re-assured.

Additionally, fire services equipment can only reach up to 30 meters. “How will they be able to put out a fire in a skyscraper over 100 meters tall?”

Kettis, however, dismissed such claims saying the height of fire trucks did not have to correspond to the height of the building.

The town planning department also said the procedure to grant any building permit, particularly for those of tall buildings, comes after dialogue with several departments including the fire service and they follow through with all the projects.

According to Kakoullis, earlier this month, Limassol municipality was also concerned about apartment blocks that are very old and in risk of collapse.

“There are about 10 to 15 of those in Limassol and if there is an earthquake it will be very dangerous.”

Although the municipality was not available for comment, Kakoullis said many apartment buildings do not have committees with tenants keeping an eye out on what maintenance work needs to be done.

Additionally, owners, even if the building is in dire need of being renewed, simply say “well I have no money to fix it,” according to Kakoullis.

A 71.7 metre tall, 16-storey tower called 'Mandarin Park' comprising a mixed development of commercial and residential properties is to be built in the Germasogia area of Limassol.
Read more
Investor Centre

Chinese investors have secured land amounting to 32,271 sqm. in the Tsiflikoudia area of Limassol to the north of the marina in a €30 million deal with the Bank of Cyprus' Real Estate Management Unit (REMU).
Read more