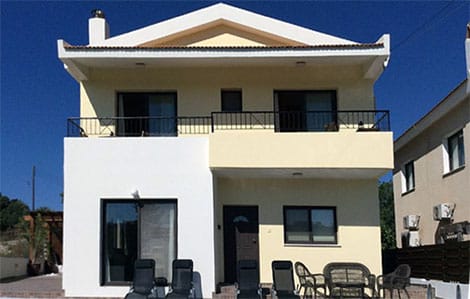 JOSEPH Moretti and his wife Fi are aiming to raise £40,000 to support numerous charity causes, namely donating £12,500 each to RSPCA and National Autistic Society by raffling their Cyprus villa situated in the Paphos village of Kathikas reports somersetlive.

The pair also aim to raise £15,000 from the raffle’s funds to Freddy’s Fight for Life, a charity set up to support a four-year-old with a rare cardiac tumour.

The appeal aims to raise £100,000 to fund Freddy’s surgery at Boston Children’s Hospital in the United States to remove a fibroma from his heart.

Freddy’s father Andy Vallender believes this is “the only opportunity we have to give Freddy a fighting chance at a full life”.

While discussing his incredible charitable act, Joseph Moretti said: “We bought our villa in Cyprus in 2012 and have enjoyed every summer in it since, but the time has come for us to reluctantly let it go in order to raise funds for an exciting new murder-mystery based business venture.

“Instead of selling it the traditional way, we thought we would do something a bit different, and allow anyone the opportunity to own their own property in this beautiful country – whilst helping some worthy causes in the process.”

The competition is set to run until February 1, 2018 but the closing date will be moved forward if their £40,000 goal is not met.

Situated in the Paphos village of Kathikas, the villa has three double bedrooms (two of which overlook the villa’s private pool), three bathrooms and a large, open plan ground floor with living area, dining area and kitchen. The raffle includes all indoor and outdoor furniture and furnishings, all kitchen appliances and equipment, entertainment items, bedding, crockery and glassware – in fact everything you need to start using your villa straight away.

The property is fully air conditioned, and there is also a log burner for cosy winter visits.

Despite some scepticism, Mr Moretti was quick to reassure that this a legitimate charity raffle and used the advice of multiple solicitors.

Speaking to the Cyprus Mail, Antonis Loizou FRICS said that it is not possible to raffle a house in Cyprus if the raffle was being set up in Cyprus, as a licence would not be given out. He said one person had tried it before – there was a case in 2015 – and he was simply not given a licence to do it.

Mr Loizou noted that since raffling houses is relatively new phenomenon there is not a lot of expertise on the ins and outs. “It’s a grey area,” he said.  “No one has touched it yet.”

In this case, he said the raffle is being organised in the UK under British law so he did not see implications if someone in Cyprus won the villa. “I imagine it would be OK,” he said, adding that the transfer of property would probably be made as usual at the land registry as in any property transaction as long as the required fees were paid.

For a chance to win a villa and support a number of charitable causes can visit their website at: http://www.winacyprusvilla.co.uk/.

Alternatively, entrants can send a letter or postcard with the answer to: Win a Cyprus Villa, 2 Hector Stones, Woolavington, Somerset, TA7 8EG.