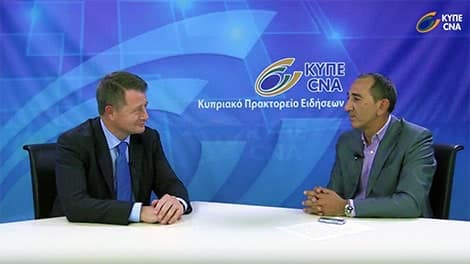 THE BANK of Cyprus’ CEO John Hourican said that he is beginning to grow impatient with those borrowers who are able to repay their debt but opt not to do so, as the bank, having completed its post crisis shrink-to-strength strategy now wants to grow.

Hourican who was commenting in an interview with the Cyprus News Agency (CNA) on Sunday, said that a minority of borrowers not servicing their loans delay doing so in an attempt to benefit from the property market recovery at a later stage.

“And that does make me impatient and makes me annoyed because we had four years and they should have come to the table and they should be in our offices trying to do a deal with us, not trying to buy more time, not trying sort of time us out in the way the legislation allows it and the courts allow it,” he said, and repeated his latest appeal to Cypriot society not to tolerate strategic defaulters any more. “This country still has a stain on its reputation for the sheer non-payment of loans and the offended parties in the non-payment of loans are the depositors of the bank”.

Bank of Cyprus, the island’s largest lender, pioneered the reduction in non-performing loans by setting up months after the banking and fiscal crisis of 2013 a specialised recovery and restructuring unit. As a result, the lender reduced its non-performing loans stock in June to €9.7 billion or half of its total loan book from over €15 billion in September 2014. Moody’s Investors Service said two years ago that it estimates that up to one in five borrowers in Cyprus may be a strategic defaulter taking advantage of the island’s legislation.

Irish banker John Hourican who joined the bank in late 2013, months after it completed its recapitalisation by converting almost half of the uninsured customer deposits into equity, said that the lender will need years to organically reduce its remaining non-performing loans stock. After initially successfully completing restructuring agreements with major corporate borrowers and with the economy expanding for the third consecutive year, Hourican acknowledged that the remaining cases of small and medium size enterprises and retail customers are more difficult as four in ten restructured loans re-default.

“The stress in households is still real and still in the system,” he said.

According to the Ministry of Finance’s latest forecast, the Cypriot economy, which exited in 2015 a prolonged recession, is expected to expand 3.6 per cent this year after growing 2.8 per cent last year, helping reduce the unemployment rate from around 11 per cent this year to 9.5 per cent next year.

Still, the lender, which increased in August its accumulated provisions to €4.6 billion or 48 per cent of its non-performing loans, is not necessarily considering resorting to the sale of loans to reduce its delinquent loan stock, even as it remains on the table, Hourican added. While it could remove faster bad loans from the bank’s balance sheet, it could not be the right thing for the country and society, he said.

He also said that “ultimately” it was he and the bank’s board of directors who took the decision to increase provisioning levels “because we thought it was the right thing to do given the progress we have made to this date”.

“We posted the additional €500m million in order to create a further option to explore potential trades because they will be more expensive than the natural organic march down and some of that pressure would have come from the European Central Bank no question”.

“It is a decision that I and the Board took because we thought it was the right thing to do given the progress we have made to this date,” he said.

Hourican, known for not mincing his words often and angering Cypriot politicians in the past who expressed fears over the provisions of the law on the sale of loans passed by the parliament less than two years ago as part of Cyprus’s bailout terms, dismissed this type of concerns.

“Words like vulture funds etc. are politically convenient tag names that are used by people who don’t want things to change and actually have to grow up a little bit more,” he said adding that the lender will have to take into account in addition to its social responsibility and the mood of the society, the fact that its depositors were bailed in four years ago.

The bank which generated last year a €64m after tax profit compared to a €438m after tax loss the year before, posted in the first six months of the year a €554m loss, largely caused by the increase in provisions, expects to return next year to profitability.

After having sold most of its non-core business abroad, as part of its shrink-to-strength strategy, the bank seeks to exploit opportunities at home as economic growth is consolidating, Hourican said.

Already, Bank of Cyprus, which in January had its stock listed on the London Stock Exchange, extended €1bn in fresh lending last year and another €845m in the first six months of 2017 alone, he said.

“I would expect that trend to continue and our balance sheet to stop shrinking as we head into 2018,” the former Royal Bank of Scotland executive said.

For now, a figure that currently is on the rise in the bank’s balance sheet is its stock in immovable property – a by-product of debt-to-asset swaps – may continue to rise as Bank of Cyprus will continue on-boarding real estate as part of restructuring agreements, Hourican said.

While their value rose meanwhile to €1.5 billion and the bank’s real estate management unit (REMU) which sold assets worth €155m alone in 2016, almost doubled the amount this year, the bank is considering other possibilities to further speed up the reduction of this type of assets, he said.

“We think there are some really smart solutions we can bring, I am not ready to announce them but we are having a look at further accelerating the reduction of real estate exposures,” Hourican said. “I am not in the business of owning real estate. I am accidentally owning real estate because of the bad behaviour of my borrowers”.

The full interview with John Hourican