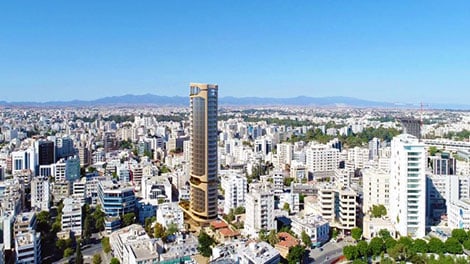 THE intensive activity recorded in the construction sector proves the government’s focus on exiting the vicious cycle of economic recession and making Cyprus an attractive destination for foreign investors, President Nicos Anastasiades has said.

Laying the cornerstone of what is to be Nicosia’s tallest building, named ‘360’, Anastasiades said “our goal is to shield and strengthen our economy even more so that our country can stay the course of sustainable development”.

The president said the 360 is expected to breathe new life to the city centre and give it a new look, while increasing the area’s quality.

“Since the initial stages of its planning, the 360 has attracted buyers, while the sale of apartments already closed has significantly supported the efforts of the developers and the economy’s liquidity,” Anastasiades said.

“Equally important are the additional amounts that will flow into the state’s coffers from taxes and other fees, while the direct and indirect creation of jobs in the construction and services sectors will trigger a positive multiplier effect on the economy.”

The construction of the 360, he added, which is but one example of the “strength and capability characterising our country’s business world”, will further improve Cyprus’ position and further rejuvenate the development of high-quality properties.

The president congratulated the Nicosia municipality for taking advantage of the incentives introduced for construction, such as increased building coefficients and expanded construction zones, thereby changing the city’s look.

“My vision is to see Nicosia becoming a modern capital and I believe that in the coming years, with the passion seen in several projects we have designed in collaboration with the municipality, we will feel truly proud for creating a capital based on a similarly modern city,” he said.

The 360 is a project by Cyfield contractors on Archbishop Makarios avenue in down-town Nicosia.

At 34 floors, it will be the highest structure in Nicosia, with 115 luxury properties available for sale.

According to the Cyfield Group website this morning, the ‘360’ project includes 110 apartments of which 10 have been sold and a further 9 are reserved.