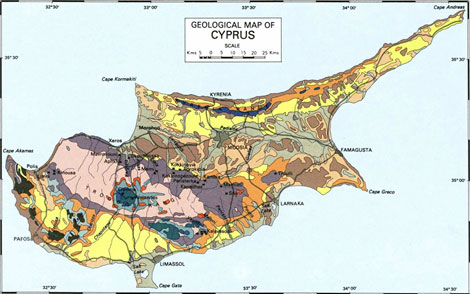 PAPHOS authorities are taking urgent action following complaints from residents and businesses in the Mousallas area of Paphos that they fear land movement and piles of rocks tumbling down the hillside onto their properties below.

“Many cracks appeared on the roads and as soon as this was brought to our attention we took the initiative to call for tenders from civil engineers, geologists and other experts, as this could prove dangerous and the situation is unpredictable,” Paphos councillor Andreas Chrysanthou, also a member of the tender committee of Paphos municipality, told the Cyprus Mail.

He added that the committee is currently preparing terms for urgent studies to be carried out on the popular hillside on which homes, restaurants and roads are all built. The area also includes the Bishopric of Paphos.

In addition to the cracks appearing on the cliff side, secretary of the Paphos Green party, Andreas Evlavis said they had received many calls from distressed residents, deeply concerned about their safety as huge rocks on the hillside above their homes are starting to slide down.

“The rocks are unstable and I believe an old problem, a number of years ago the area was piled up and mesh was placed around them, but some are already close to falling. It needs specialist to investigate what is wrong and to find a solution,” he said.

He added that preventative measures must be taken before anything terrible occurs which could even result in the loss of life.

“Many people live all over this hillside and it’s close to a number of main roads, an earthquake or heavy rain could result in there being a lot of victims. The area urgently needs greater protection,” he said.

He added that in the last few days, part of a restaurant parking area had to be cordoned off as cracks were so large.

Chrysanthou said these cracks have now been filled but added that this is only a temporary fix ahead of a more permanent solution.

“We will have to wait until we know the results of the specialist studies but whatever action is recommended and necessary, we will take. The safety of our citizens is paramount,” he said.