DESPITE continuing problems with Title Deeds, property sales in Cyprus rose 24 per cent during 2017 according to official statistics published by the Department of Lands and Surveys. This follows an annual rise of 43 per cent in 2016, 9 per cent in 2015 and 20 per cent in 2014.

During December 2017 total of 1,537 contracts for the sale of residential and commercial properties and land (building plots and fields) were deposited at Land Registry offices across Cyprus, compared with the 1,134 deposited in December. 2016; an increase of 36% and the highest number since July 2008.

Sales rose in all districts. In percentage terms Nicosia (the capital) led the way with a rise in sales of 113% followed by Famagusta with an increase of 94%. Meanwhile sales in Limassol, Larnaca and Paphos rose by 23%, 18% and 10% respectively.

Although sales in Larnaca fell by 1% over the year, they rose in all the other districts. Annual sales in Famagusta rose by 44% followed by Nicosia with a rise of 42%. Meanwhile property sales in Limassol and Paphos rose by 27% and 23% respectively.

Domestic sales rose in all districts. In percentage terms Nicosia led the way with sales up 133%, followed by Famagusta, where sales rose by 107%. Meanwhile, sales in Limassol, Paphos and Larnaca rose by 39%, 22% and 18% respectively.

During 2017 domestic sales rose 21% compared with 2016. Although sales fell by 7% in Larnaca, they rose in all the other districts. In percentage terms sales in Nicosia rose by 44% followed by Famagusta where they rose by 38%. Meanwhile sales in Limassol and Paphos rose by 25% and 14% respectively.

Although sales rose by 33% in Famagusta, 29% in Nicosia and 21% in Larnaca, these increases were outweighed by falls of 17% in Limassol and 5% in Paphos.

Sales in 2007, immediately before the property bubble burst, reached 21,245. In 2013 sales reached their lowest on record at 3,767. Since then sales have risen for four consecutive years. 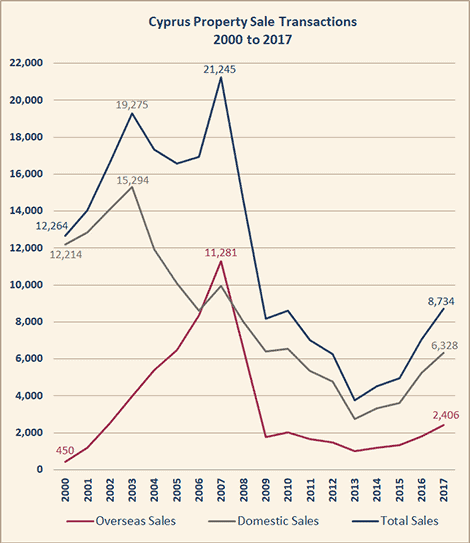 Property sales in Cyprus showed signs of making a recovery in June following the Government's easing of the COVID-19 lockdown measures and its decision...
Read more
Articles