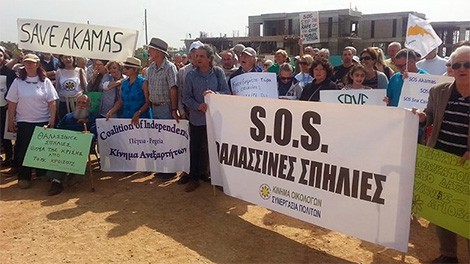 RENEWED desecration in the stunning and environmentally sensitive sea caves area of Peyia in Paphos has sparked protests amongst local residents and today’s news that a 168-room hotel and 20 villas have been given the nod of approval is bound to trigger further controversy.

In 2009 property developers caused irreparable damage to the natural environment using heavy machinery to cut into the sea caves coastal rock formations. (The area is the birthing habitat of the Mediterranean Monk Seal, which is listed as the most “critically endangered” marine mammal species in the Mediterranean by the International Union for the Conservation of Nature.)

At that time Andreas Evlavis, the Paphos District Secretary of the Green Party said that “the developers have caused a huge amount of damage. When they realised they had been spotted, the driver of the vehicle ran away.”

The Paphos District Office representative for beaches, Andreas Charalambous, was equally upset. “I have been to see this problem for myself and it’s terrible.”

He stressed, “I believe that my bosses are aware of the case and have handed the file over to the police, and then the matter will go to court.”

However, it appears that no action was taken over the illegal activities.

Earlier this month more than two hundred people turned out to support a demonstration at the protected sea caves area opposing building development near the sea caves, where six villas are under construction. A demonstration earlier in the week outside the parliament in Nicosia was supported by a large number of environmentalist groups.

Speaking to the Cyprus Mail Andreas Evlavis that this is just one of the developments in the area which is detrimental to the environment.

“Our demonstration on Sunday showed that the six villas are not our only target, but all of the damage that has taken place here in the last years.”

The House watchdog committee has requested the auditor-general to investigate how it was made possible for a developer to acquire land at the environmentally sensitive sea caves in Pegeia and obtain permission to build villas.

The Cyprus Mail has reported today that the development of a five-star hotel and so-called luxury villas in the environmentally sensitive area near the sea caves has been given the go ahead by the environment department.

The proposed development comprising a 168 room five-star hotel and 24 residences and 20 villas with swimming pools will be located next to the sea caves and archaeological site of Ayios Georgios, adjacent to Natura2000 areas.

This latest development is bound to trigger further protests.

But given their past performance it seems likely that the authorities will be either unwilling or unable to step in and protect the island’s natural beauty.