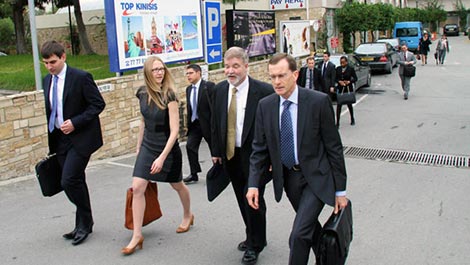 A DELEGATION from the Troika of Cyprus’ international lenders – the International Monetary Fund (IMF), the European Commission (EC), and the European Central Bank (ECB) – arrived in Cyprus on Monday for a fourth post-programme surveillance following the island’s successful exit from the economic adjustment programme.

The monitoring mission is set to be completed by next Friday, CNA sources say.

Troika heads are also in Cyprus and are expected to have meetings with ministers and parliamentary party leaders among others, the same sources say.

After Cyprus completed its adjustment programme in March 2016, monitoring by its international lenders takes place every six months until 75% of its loan granted by the European Stability Mechanism of €7.24 billion is paid off.

According to the same sources the mission`s monitoring will focus on macroeconomic and fiscal developments while it will also look into matters relating to payroll, labour, health and energy, as well as the insolvency framework and the foreclosures legislation.

Justice in Cyprus and delays in the issuance of title deeds and taxation will also be examined.

Non-performing loans and the restructuring of loans will be the focus of meetings at the Central Bank, among other issues.

Immediately after the mission concludes its visit, a concise text with the general outcome of the monitoring will be issued. A complete report is set to follow after about two months.

The Troika’s next post-programme monitoring mission will be in Cyprus in September.