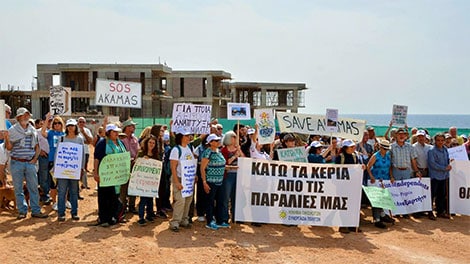 A NUMBER of reports concerning the on-going desecration of the sea caves area of Peyia have been published in the local media over the past week:

On Thursday, the Greek-language Phileleftheros published an announcement Here are the government measures for the Sea Caves:

With the aim of integrating the protection of sea caves, an important habitat in our country, the Ministers of Agriculture, Rural Development, the Environment and the Interior held a meeting in the presence of the Directors of all the departments involved in the two Ministries. Ministers understand the concerns expressed by civil society on the issue and believe that with the cooperation of local society, organized clusters, local authorities and government services, it is possible to achieve rational management of the area and preservation of the significant biodiversity it hosts.

At the meeting, the following measures were decided:

Depending on the findings of the study, it will be considered, where appropriate, to extend the existing beach protection zone to minimize the impact of human activity on the sensitive habitats of the area while ensuring the safety of any structures and bystanders. The study will propose specific measures and, according to its findings, will further specify the measures outlined below.

Prohibition of fishing, crossing of boats and other navigable resources in the proximity of the sea caves area. The Minister of Agriculture, Rural Development and the Environment will issue a relevant decree on the basis of Article 5A of the Fisheries Law and at the same time promote the amendment of the Fisheries Regulations to include the management measures in the provisions of the Regulations.

Prohibition of the construction of a coastal pedestrian street and landscaping within the Beach Protection Zone.

Mapping the coastal area of ??seascapes and assessing the extent of erosion, as well as signs that pose risks for visitors.

The Geological Survey Department will conduct a geotechnical assessment of the seashore cave area and determine the areas with unstable and steep slopes that are at risk of precipitation. The Department of Forests of the Ministry of Agriculture, Rural Development and the Environment, in cooperation with the Municipality of Pegeia, will proceed with the installation of a fence or other means for the protection of the cave ecosystem as well as for the safety of the visitors.

Changing road lighting so as not to alter natural light and/or luminescence levels and to fully comply with the protection requirements for Natura 2000 site characterization species.

The imposition of restrictive conditions in the context of the issue of planning permissions according to which owners are prohibited from altering the natural light and/or luminescence levels by means of direct and/or indirect sources of light pollution according to the findings of the Environmental Notice. *

Prohibition of events that may cause noise / light pollution in consultation with local authorities.

Layout of the green areas of the sea-side developments along the coastal protection zone to create a larger zone that should be allowed to evolve naturally under the terms of planning permission. *

Not allowing owners to buy the green space in their urban development application.

Removal of foreign/invasive species from green areas, as there is a serious risk of their escape and extension to natural habitats within the Natura 2000 area. In their place, local flora species may be used according to a list prepared by the Department of Forests and the Environment Department.

Maintenance and/or rehabilitation by the Department of Forests of terrestrial natural habitats in the State Party within the Protected Area of ??the Beach that has been downgraded and the prohibition of any other construction or activities in that Zone.

A ban on the use of any insecticides or fertilizers in both the gardens of existing villas and public green areas.

Prohibition of non-governmental projects to shield the coastal slope or to remove rocks from the sea or the beach.

Determination of the access of trucks and other heavy goods vehicles from all deployments under construction, taking into account the sensitivity of the affected areas, where appropriate. *

Monitoring on a systematic basis the implementation of the above measures.

Also on Thursday the Cyprus Mail published a report ‘No turning back time for sea caves’ minister says:

The clock cannot be turned back on controversial developments at the sea caves area in Peyia, Paphos, and authorities can only limit the damage by rectifying some illegalities and take steps to avoid them in the future, Agriculture Minister Costas Kadis said on Thursday.

The measures will not greatly affect two major developments in the area, a number of villas constructed by Leptos, and a huge project by Korantina Homes further west, which involves a luxury hotel and some 40 villas.

The meeting heard that some eight irregularities will have to be restored at the Korantina project, including kiosks, a lifeguard tower, and rock work. The ministers were assured that the projects are not expected to have irreversible effects on the area’s environment.

Minister Kadis told the Cyprus Mail that he was determined to apply Thursday’s decisions to prevent this from happening again.

“I am determined to do whatever necessary to avoid similar issues in the future and ensure what has been done won’t do any further damage,” he told the Cyprus Mail. “Unfortunately, no one can turn back time.”

The area where the Leptos development is being constructed had been rezoned in 2008 nine days before the presidential elections by then interior minister Christos Patsalides.

Patsalides defended his action arguing that he had simply accepted the recommendations of experts, which had been prepared following consultations with local officials, the district administration and the union of communities.

No one had objected after the publication of the decision, he said.

The former minister in the Tassos Papadopoulos administration questioned why building permits were granted 10 years later if the decision at the time had been wrong.

That process was now under investigation by the auditor-general.

On Friday the Cyprus Mail published a report that the Green Party had appealed to European Commission over the sea caves developments:

The Green Party on Friday called on the EU to examine whether the government’s decisions surrounding the controversial developments in the sea caves area in Peyia, Paphos were legal.

In a letter submitted to the European Commission’s representation in Cyprus, party leader Giorgos Perdikis said he was reporting the government and called on the EU environment commissioner to examine the case.

“We ask of the EU environment commissioner to examine the government’s decisions on the basis of their legality in relation to the European institutional framework on protecting nature,” the letter said.

The sea caves are the birthing spot of the Mediterranean Monk Seal (Monachus monachus), which is listed as the most ‘critically endangered’ marine mammal species in the Mediterranean by the International Union for the Conservation of Nature (IUCN).

Deputy chief of the EU commission’s representation in Cyprus Thea Pieridou said the report would be sent to the relevant department in Brussels.

Limassol municipality and the Land Development Corporation (KOAG) reached an official agreement on Thursday regarding the establishment of the largest housing project ever undertaken in Cyprus, worth €100 million.
Read more
Property Prices