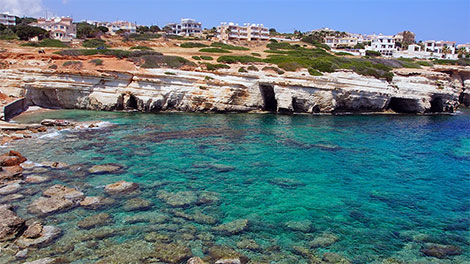 THE DESECRATION of stunning and environmentally sensitive sea caves area in the municipality of Peyia in Paphos on the west coast of Cyprus has been going on for years by the construction of so-called ‘luxury homes’ and other developments by those who seem intent on destroying the area in their never-ending quest for profit.

However the latest desecration of the area , the construction of a five-star hotel, residences and villas with swimming pools by Korantina Homes Ltd, has been stopped (at least for the time being) by Agriculture Minister Costas Kadis who has blocked the Building Permit. This move, according to Stockwatch, followed an objection by the Auditor General, Odysseas Michaelides.

Meanwhile the Cyprus Scientific and Technical Chamber (ETEK) has warned that Cyprus had reached a crossroads where it should take the right and difficult road to accept mistakes and take drastic measures to restore the environmental damage by withdrawing wrongly given permits.

ETEK also warned that pressures for growth in the remaining environmentally sensitive areas in the Republic will intensify. If Cyprus allows the self-destructive process to profit a few at the expense of many to continue it will lose the few remaining environmental diamonds and lose an important competitive advantage of the island’s tourist product.