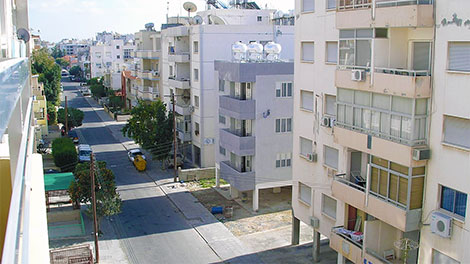 RENTS in Limassol have gone up by around 25 per cent in under two years, way higher than other cities in Cyprus and leaving ordinary Limassolians increasingly priced out of the market.

“If we’re talking about flats near the coast – add another 30 per cent to these prices,” he told the Sunday Mail.

A post on a Facebook group from someone looking for a decent flat for €300 near the beach drew a series of exasperated ‘good luck’ comments and pictures of someone looking far into the distance with binoculars.

Online searches show rents at staggering figures – anywhere between €1,000 and €2,500 for a two-bedroom apartment.

Contrary to other cities which attract foreigners, Limassol is an upmarket destination, Loizou added.

“It isn’t like Protaras which has people visiting only for the summer,” Limassol is attracting people for more than just entertainment but work.

“New hotels are being built, the casino is going to be there, cruises are arriving at the port – all these investments bring money,” Loizou said.

Also home to shipping companies, forex companies and international banks Limassol has attracted foreign nationals with a lot more cash in their pocket whose demand for a place to stay is bringing up prices, clashing with those on average Cypriot wages.

“A German for example working in the shipping industry in Cyprus, doesn’t get a salary of €1,500. He gets anywhere between €2,000 – €3,000 reflecting the income he would have in Germany. He therefore can afford to pay more rent.”

This pushes prices up, pricing out those on an average Cypriot salary.

The university in Limassol, Tepak, coupled with other commercial activities have all contributed to the increasing demand.

According to Loizou, a two bedroom flat in Engomi, near the University of Nicosia costs around €600. Near Tepak, however, the average rent for a similar flat is about €750.

Limassol has also become a major magnet for those taking advantage of the citizenship-for-investment scheme. This has had a knock-on effect on the rental market even though the main focus is property sales.

“The passport scheme has 100 per cent contributed to the increased demand,” said Loizou.

A lot of this money stays in Limassol, Loizou said.

“The developer will make profit, the construction company, the land owner, the builder,” they then have more purchasing power.

Chairman of the Royal Institution of Chartered Surveyors (RICS) Thomas Dimopoulos put forward another reason for the increase in rents in general: the difficulty of obtaining loans to purchase a house.

“Although the situation has greatly improved lately (particularly after the 2013 crisis), criteria for loans are quite strict and restrict many (potential) property buyers,” he told the Sunday Mail.

“Those without capital, cannot buy property. Demand for rentals increases and rent prices go up.” This is also seen in figures that show between 2007 and 2017, 80 per cent of residential purchases were apartments and 20 per cent were houses.

“The majority of developments in Limassol have historically been apartments blocks, while the new developments are also high-rise apartment buildings who take advantage of the building coefficient incentives.”

Chairman of the Cyprus Scientific and Technical Chamber (Etek), Stelios Ahniotis, said the effects this is having on society are becoming increasingly visible.

“Before, we used to see our youth wanting their independence, moving out and living together when they were in a relationship,” he said.

“Now, they’re starting to move back in with their parents,” living with one or the other’s in-laws.

Christos Antoniou, 26, began renting his own flat a year ago. He was lucky to find one at a great location – near the ‘five road’ area – at €300 for one bedroom. It is very old and he had to pay to buy some furniture, but he was happy with the independence it offered him.

However his contract is coming to an end and his landlord recently approached him to tell him he wants an extra €50.

“I don’t know what I’m going to do. I really can’t afford this. I make €800 with my job so I’d have to pay €350 for rent plus all the other expenses – electricity, water, food, insurance and petrol. How do I have a life after this?”

Though not much of a spender, he enjoyed having the ability to maintain a normal social life and pay his monthly gym membership. It seems impossible to him however to maintain all of that and have his independence.

The idea of moving back in with his parents, however, as he approaches his 30s and is in a long-term relationship, isn’t appealing.

“Cypriots are becoming accustomed to things that were a norm abroad but were looked down on here years ago,” Ahniotis said.

For instance, it was unheard of a decade ago to have a family with two children live in an apartment.

One cleaner, who lives in Asomatos near Trachoni village – an expensive location because of its proximity to the mall – says she pays €680 per month for a one-bedroom apartment. She makes €800 per month.

Those who are struggling to afford to rent in Limassol proper are being forced to move further towards the west in areas such as Ypsonas, Polemidia and Kolossi or to the eastern part of the city, according to Dimopoulos.

“This is increasing the suburbanisation effect,” he said, referring to how populations shift from central urban areas to suburbs.

Moving further out of the centre, however, likely means extra spending on travelling expenses.

Exasperated and frustrated, some are finding solace in humour. A post on Facebook of a decrepit barn-type house, comes with the caption: “house for rent in Limassol. Only €1,780.”