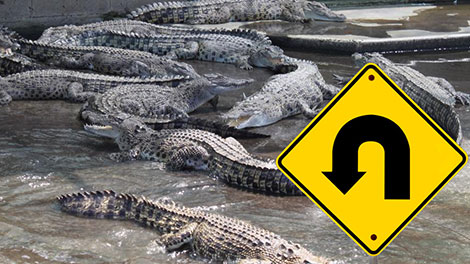 THE ACHNA local council voted on Tuesday to withdraw support for the creation of a crocodile park in the community following public opposition to the project.

Six members of the council voted for the move while two were against it.

According to a press release, the decision was greeted with great relief by the local residents who had opposed the park.

The local committee for the struggle against the crocodile park warmly thanked the council for listening to the concerns of the Achna inhabitants and the general public.

They also thanked a number of other fellow-fighters in their struggle, the ecologists, members of the House environment committee, the Animal party, Terra Cypria as well as agricultural organisations Eka, Pek, and Panagrotikos and the University of Nicosia which pointed out the health implications of the project.

The committee called on the government to respect the decision of the community council and to reject any other request for the opening of a crocodile park in Cyprus.

Israeli company TSA Crocopark had approached Achna community in the Famagusta district over creating a crocodile park after their proposal was rejected by the Psematismenos and Athienou communities.

The community council had said they would not object if the company decided to file for a permit but said later it might reconsider following strong reaction by area residents and environmentalists.

The proposal concerned a theme park hosting around 100 crocodiles, with a souvenir shop, a canteen, and walking paths. The company proposed its creation between Achna and Vrysoules near the old Larnaca to Famagusta road.

The matter was discussed at the House environment committee after the initial decision by the community council to allow the park.

MPs heard that it would need 80 tonnes of water per day and there was also a danger of spreading disease to humans.

The head of the health ministry’s infectious disease surveillance unit told MPs that the crocodiles could be infected with the West Nile virus, which could be transferred to humans through mosquitoes.