Glimmer of hope for Pissouri homeowners 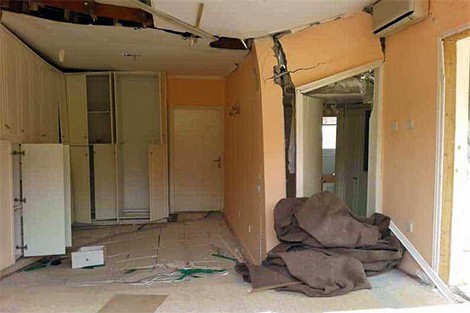 AFTER years of worry, residents in Limnes village Pissouri are hopeful a solution will now be found for their rapidly disintegrating homes following a recent meeting with the interior minister.

Member of the Pissouri community council, Markos Foutas, told the Sunday Mail this week that a course of action had been decided during the meeting with Interior Minister Constantinos Petrides which took place on Friday. The most important is that a comprehensive study will be carried out to outline the various options and the costs associated with each, that could help the government decide the best way forward.

In total, 60 properties are affected by serious land slippage which has caused some homes to rip apart, roads to buckle and electricity cables to move. Four families have had to move out completely. The damage affects the whole area and not just properties built by individual developers.

During the meeting, it was decided to establish a committee comprised of the Limassol district officer, experts from the department of geological survey, public works, water board and a member of the Pissouri community council.

Their first task, according to Foutas is to call for tenders in the next few weeks for the study which is set to be carried out.

Detailing its purpose, he said the study would offer a breakdown of possible solutions which could be undertaken to solve the problems and the respective costs.

For example, “would they approach it geologically, using piling to fix the roads for example? Or would they evacuate the area? How much would each option cost?”

This, according to Foutas will serve as a guide for the government.

The study is expected to be completed by the end of the year.

Petrides also said there was a “big possibility” that he would table a proposal to cabinet aimed to help the families who have had to be evicted.

According to Foutas this would be in the form of financial assistance. However, the minister said it was a matter of studying all options – for instance the legal aspect as private developers also have responsibility.

Even though this is certainly not the first time residents got their hopes up, Foutas said “we are very positive. The meeting lasted over two hours and the minister gave us a lot of attention.”

In 2015, the former interior minister, Socratis Hasikos, had announced plans to put measures in place. These included expanding projects designed to channel rainwater away from the area. New wells were also set to be drilled to monitor the underground water.

The cost, quoted at €20m, was going to be paid for by the government.

Nothing materialised and then the government changed its mind, saying the fault lay with the contractors who had, for instance, used inadequate filling-in works.

According to Georgia Elina Zoi, a lawyer who has taken up the case on behalf of the residents, this was nothing but a ploy as the engineers who designed the homes over 20 years ago are either retired or dead.