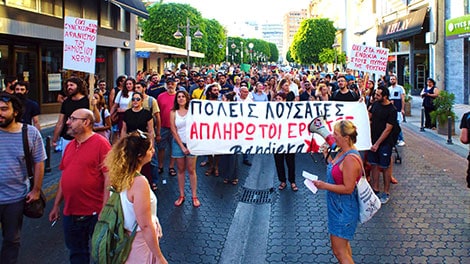 ON SATURDAY an unofficial group ‘Limassol for All’ staged a protest outside the Limassol District Administration office on Anexartisias Street against the high rents in the city.

The protest, which was formed by a call to action on Facebook, was attended by hundreds of mainly young people carrying banners and slogans against rents for homes and apartments, which have increased in the region of 25 percent in less than two years.

The main culprit, they claim, is attempts to attract foreign capital to the city though residential developments targeted at high net worth investors, which has resulted in a more expensive housing market. Plans for the city have not been discussed with local residents.

Addressing the protestors one of the organisers said “The high rents aren’t because landlords woke up one day and decided to bleed the people dry. They are the result of a short-sighted and extremely aggressive policy to attract foreign money to solve the problems of the big local players.”

One of the protestors said that “Many residents are worried about the imminent changes to the city but feel helpless to do anything about them. Our purpose is to break the wall of silence.”

Members of the group made it clear that their purpose was not to force landlords to lower their rents “they have their right to a free market”, but what needs to change is the attitude of estate agents so they do not over-value properties by calling it “growth”.

The organisers said that what is happening today is forcing young people to leave the city as they cannot afford the high rents and property prices.

The ‘Limassol for All’ team plans to organise discussions and workshops and cultural events to attract more people to the cause.