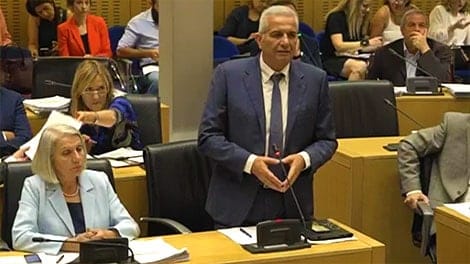 OPPOSITION parties have given notice in the Cyprus parliament that they intend to make life difficult for the government in its efforts to conclude an agreement for the takeover of the Cyprus Cooperative Bank by the Hellenic Bank and pass legislation easing restrictions on the handling of non-performing loans (NPLs).

A plenary session of parliament today decided against declaring the legislation urgent, which means that it will have to go through the normal process resulting in a long delay.

A majority of opposition MPs decided to have the bills discussed by the parliamentary finance committee, which will decide whether to have them debated in a week’s time and to go ahead with a political debate concerning the handling of the Cooperative Bank by the government.

The bills relate to government guarantees, the insolvency framework, the sales of loans, foreclosures and the transfer of properties..

Both the government and the Central Bank have warned that failure to approve the legislation in time may lead to the destabilisation of another bank, which has not been named.

House speaker Demetris Syllouris said that the government will submit a bill on Monday for the protection of primary residence owners and added that they all expressed their will to vote on the bills. “No-one will vote blindly” he said.