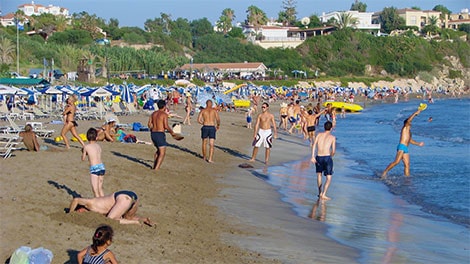 THE GOVERNMENT’S decision to allow a 2005 appeal by Leptos developers to build next to blue-flagged Coral Bay is scandalous and overrules a town-planning decision, environmentalists local Peyia officials said this week.

Leptos’ appeal concerns building 22 villas and services on a piece of land which sits above Coral Bay and has commanding views of the beach and Mediterranean Sea and has recently been used as a car park.

Andreas Evlavis, secretary of the Paphos Green Party, told the Sunday Mail that the government’s decision to effectively ignore the local plan and overrule the decision of town planning is a huge scandal.

“This will open the way for all developers to do what they want,” he said. “If this goes ahead, there will be buildings everywhere at Coral Bay and no place for visitors. The developer also wants to take over the operation of the two beach kiosks as part of the agreement on beach access, another big scandal for us.”

He added that the Green party fully support the efforts of the local mayor and the municipality not to give in to the demands of the developer.

Although unwilling to go into details because discussions with Peyia municipality are ongoing, developer George Leptos told the Sunday Mail that his aim is to enhance the area overall.

“The municipality knows our views and what we want to do in the area. We understand the importance of Coral Bay and the legal rights of the company, we would like to resolve this situation,” he said.

Leptos confirmed that the original application to develop Plot 1 – 22 villas and services, such as a restaurant – was made in 2005 and rejected by Paphos town planning.

However, in May, the government ministerial committee upheld the appeal, with stipulations. The Peyia mayor and his council only found out about it in September.

“Since 2005 we have been in long discussions and expressed our views. Our wish is to include facilities necessary for a public beach and to enhance the area overall,” said Leptos.

He added that comments made that there is no access to the beach after the development was built was not the case as there are four or five existing pathways leading from the road to the beach.

“There will be a minimum of six or seven ways of public access and we would like to reach an amicable solution to move ahead smoothly.”

Mayor of Peyia, Marinos Lambrou, said the Leptos application made in 2005 was rejected as provisions of the Paphos local plan and other legislation on public pathways and ravines were not met.

He said that when the original application was made, more building density was permitted, and since then the regulations have changed. This decision was overturned by the central government and not by town planning in Paphos, he added.

“I want to believe that the government didn’t understand what they approved,” he said.

The mayor said that if such a development were allowed to go ahead, it would mean not only Coral Bay is finished, but Peyia too.

“I don’t know if Leptos has changed the plans, but the ones approved do not show any public access.”

He noted that the developer has the right to develop the land, which has around fifty years left on a lease, but at 15-20 percent maximum and that 40 per cent also lies in the coastal protected zone.

“This is according to the laws which exist now, and with the approval of the planning authority.”

A two-hour meeting between the council members and six Leptos officials, including both Michael Leptos and his son George Leptos, took place last week.

Peyia councillor Linda Leblanc noted that the mayor presented counter-proposals which fall under the current Local Town Plan, which mean that around 15 to 20 per cent could be built on.

“Leptos also told us if we don’t make a deal, we should buy the land. This is my preference and one that has been refused by Leptos for many years,” she said.

“If he is serious, let’s get an appraisal, it’s in the public interest to do so.”

Leblanc also pointed out that two restrictions placed on the appeal upheld by the government make it impossible to move forward under current laws.

“These refer to the abolition or moving of public footpaths and the ravine/riverbed, which is impossible under the law,” she said.

However, she also noted that a recent proposal by the Disy parliamentary group to amend the property law, would permit the privatisation of public land, such as footpaths and riverbeds, and could favour the developer.

“If approved, the proposed new law which was put forward in September, will clear the way of these stipulations to be met, and Coral Bay to be developed.”

Both Lambrou and Leblanc noted that no decisions have yet been taken by council and the situation is on the agenda for the next council meeting, which is open to the public, and slated for next week.

“We are also looking at pursuing legal action against the government,” she said.

The Sunday Mail was unable to contact the Minister of the Interior for comment as he is abroad.

Limassol municipality and the Land Development Corporation (KOAG) reached an official agreement on Thursday regarding the establishment of the largest housing project ever undertaken in Cyprus, worth €100 million.
Read more
Property Prices