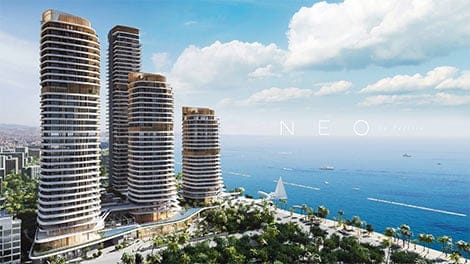 LIMASSOL Municipality’s plans to develop public land in the heart of the town has reignited criticism of the authorities over the number of high-rises being built along the coast.

Critics argue that plans to build another tall building in an area which has seen its fair share of ‘towers’, will only add to the many unsustainable urban constructions blighting the town.

The municipality plans to have a hotel built on the plot worth €75 million, currently used as a parking lot. The hotel is to be built by a private investor through a Build–operate–transfer (BOT) agreement which will see the property being handed back to the municipality in 2038.

Deloitte was assigned to prepare a financial feasibility study on which the terms of the procurement will be decided.

The property is located in one of Limassol’s most expensive areas, the Enaerios area attracts locals as it has dozens of restaurants, shops and cafes. It is located opposite one of the town’s landmarks, the popular Limassol pier.

According to the study prepared, developers will be able to build on an area covering 39,400 sq.m.

Limassol Mayor Nicos Nicolaides, in comments made to journalists, said residents of Limassol will have the last word as the final decisions will be taken during public consultations to be held once the strategic investor is identified.

“Our goal is to properly develop this very important landmark so that the municipality can upgrade the infrastructure for its citizens and also use it commercially so that it can strengthen its economic potential to offer more to its citizens,” said Nicolaides.

However, locals and experts consider that the municipal development will only add unnecessary strain on the area and its infrastructure, inflating the threat to sustainability.

Experts are concerned over the sustainability of the current development, taking into account that more such projects are in the pipeline. The total number of applications to build tall buildings, pending approval from the Urban Planning Department amount to 30, while the current number of high-rises in Limassol is 40.

Cities and their skylines evolve and change through time with tall buildings making their mark on urban life. While they may serve as catalysts for regeneration and stimulate further investment, due to their size and prominence, such buildings may also harm the qualities that people value about a place, especially when they are designed with a lack of appreciation or understanding of their environment.

President of the Cyprus Technical Chamber, Stelios Achniotis, said the decisive element for which of the scenarios is to prevail is the existence, or absence, of a coherent and considered strategy for building tall.

Unfortunately, he said this is not the case for Limassol.

“In Cyprus we build first and then we design the strategy, trying, in reality, to control – if possible – the consequences and assess the damages caused by the lack of planning in the first place!”

Acknowledging that to some extent the market is to decide what kind of developments will be realised, he stressed that the state’s responsibility should be to provide the strategic directions and principles in order to strengthen economic development in a sustainable, responsible way.

“We have to be clear on something: the presidential incentives for economic development or any other similar initiatives, without a simultaneous specific development strategy, equals no guidelines at all,” he said.

Achniotis said that the absence of such a plan will eventually lead to allowing “the private interests-driven market to decide for us, those characteristics – even on public land – without consideration of their impact on sustainable growth, urban fabric or everyday life of citizens in Cyprus”.

Achniotis commenting on the Enaerios development, he stressed that public land is a valuable resource and asset for all citizens. “The development of public land should also be based on an urban planning strategy and driven by a common vision for the city of Limassol.”

Achniotis questioned whether the town’s current infrastructure can withstand and support all the towers rising in the sky.

He added that issues concerning health and safety and fire hazards, construction sites and their impact on the neighbouring properties, future management and conservation of tall building, have yet to be tabled.

Assistant Professor in the Urban Planning Department of the Architecture Faculty at Frederick University, Vyronas Ioannou, echoed the same fears about developing an area without a guide-map.

“If the coastal line of the city, which is currently the most expensive area, is overloaded with tall buildings, then it is very possible that the area will lose its value,” he said.

Ioannou added that, as the high-rise apartments are being sold to investors, seeking to obtain a Cyprus passport, there is always the risk that these residencies maybe abandoned.

“This is what happened in cities like London and Vancouver, where impermanent demand led to rapid development with skyscrapers occupying the skies. At the end of the day, these towers were abandoned, and the area devalued.”

He also finds that the development in the coastal area of the city is opportunistic and without any regulation.

“There is no vision, the proper infrastructure is not being laid down and these buildings join the current infrastructure networks which are very doubtful if they can withstand such development,” explained Ioannou.

Ioannou said the lack of vision is made clear when one takes a look at the city’s infrastructure, such as the sewage system.

“We are currently in the dark over whether the sewage system will be able to handle sewage from these towers”.

He added that if it is proven in the future that the system cannot handle the waste from these towers, then serious investment, which will burden taxpayers, will have to be made to correct matters.

Ioannou said that the Limassol bay environment is taking a beating from underground seawater being pumped from the foundations of the towers.

“As there is no plan as to what will happen with this water, it being led back to the sea.”

The town planning expert said that as a holistic environmental study has not been carried out, we have no idea to what extent the Limassol Bay is to be affected. He added that if authorities had a vision, this water could have been treated and used to water plants and trees on municipal land.

Environmentalists and local action groups are angry at the lack of a common vision for the development of the town that could see the Limassol Bay turn into a swamp over the next decade.

According to figures submitted to the House by the Minister of Agriculture, Costas Kadis, two of the developments currently underway have secured permission to unload 5,000 cubic meters of water daily in the sea.

Kadis was answering a question posed by Cyprus Greens MP Charalambos Theopemptou regarding possible pollution caused by the Limassol towers.

A group of winter swimmers have had the waters tested by professionals who have found that there is an unusual rise in algae.

Erma Stylianides, representative of the organised Winter Swimmers of Limassol, said: “We are currently on autopilot, with no plan whatsoever. We just care for the easy money and do not think of the collective impact these buildings will have on the environment.”

“We are not against development, far from it. But we would like to see the city being developed with a plan drawn after an overall environmental study is carried out,” added Stylianides.

Despite efforts made by the Financial Mirror, the Limassol Municipality, and the Mayor Nicos Nicolaides did not make themselves available for comment.