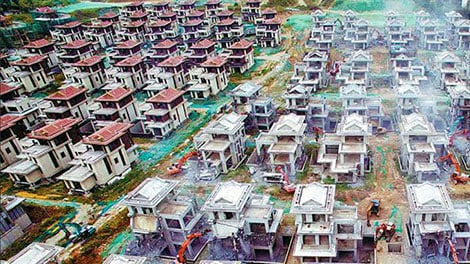 BANKS IN CYPRUS have acquired over 14,000 properties comprising commercial, residential, tourist, small apartments, small shops, farmland and building plots from businesses and households through foreclosures and debt-to-asset swaps according to a report in Phileleftheros.

The number represents around 40% of the total number of properties sold in the past five years, based on the number of contracts deposited at Land Registry offices.

In addition to properties acquired through debt-to asset swaps, the bank has sold more than 14,000 loans secured by real estate collateral to Apollo Global Management. According to Phileleftheros these involve 9,065 properties.

In further efforts to further reduce its NPLs, the Bank of Cyprus is reported to be preparing a project codenamed ‘Helix 2’. This project is to include loans with a book value of more than €2 billion, including the bank’s most problematic loans. If successful this project should enable the bank to reduce its percentage of non-performing loans to less than 10% of the total.

The bank is also reported to be in the process of foreclosing on hundreds of further properties.

The Phileftheros report also noted that between January and August 2018, Altamira acquired 1,389 properties with a total value of €185 million and that the Hellenic Bank has around 650 properties up for auction.

APS, which took over the Hellenic Bank’s toxic loans in 2017 and to which the Bank of Cyprus sold a portfolio of non-performing loans codenamed ‘Velocity’ currently has 814 Cyprus properties for sale on its website.