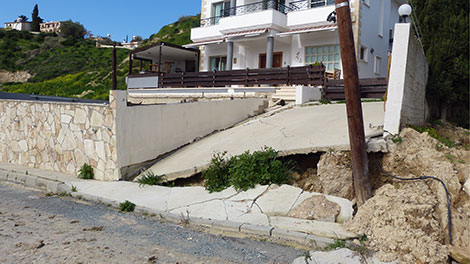 THE GOVERNMENT is to compensate owners of homes affected by the land slippage in Pissouri, the head of the House interior committee, Andreas Kyprianou said on Monday.

The problems caused by the land slippage to residents was discussed by the committee in the presence of House President, Demetris Syllouris, who had recently visited the area and met with affected homeowners.

Following the meeting, Kyprianou said that the government has taken two political decisions; to compensate those affected by the land slippage in the Limnes area and to carry out a study on the stabilisation of the area.

“It seems that the problem is much bigger than it was initially estimated. It is a geological instability that affects the entire southwest of Pissouri,” Kyprianou said.

Kyprianou said that an amount would be given to families that had to leave their damaged homes. To date, four families have been informed that their house is inhabitable, but the number is expected to rise.

Deputies welcomed the measures announced but also criticised the government for the delay.

Greens’ MP, Giorgos Perdikis, said that the government moves at a snail’s pace. By the time measures are taken, he said, most of the buildings will have collapsed leaving scores of residents without a home.

The land slippage, which first appeared in 2012, seriously affected many houses and apartments. The affected area measures around 500 thousand square metres and is increasing. Four families have had to leave their homes.

In 2015, some of the property owners formed the Pissouri Housing Initiative Group (PHIG) and paid out thousands of euros to obtain studies and papers from various renowned international experts and also satellite imaging, at a cost of €25,000, which measures the movement of the land. According to the study, the movement is up to 40cm per year, which is a lot when it’s pressing against a house.