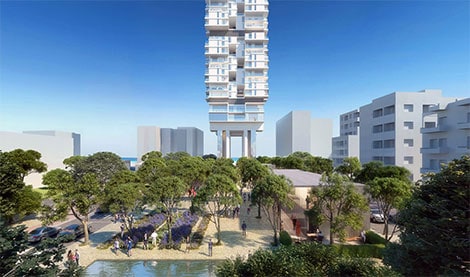 PLANS to redevelop the site of Debenhams Olympia shopping centre on the Limassol coastal road are moving forward and the construction of the high rise Aura development of luxury apartments should be completed by the end of 2022.

Designed by the award-winning British architectural design and engineering firm of Foster + Partners, the cost of building Aura are estimated at €108 million, while the demolition of the current building will cost around €500,000.

The 197 metre high rise Aura tower will be the tallest in Cyprus and will comprise 137 two-to-four-bedroom apartments and a five-bedroom penthouse with panoramic views of the Mediterranean.

The building will be raised 23.9m from ground level, creating the impression that it is floating high above the landscaped gardens below. Spanning 7,000 sqm and 200m long, the gardens seamlessly connect the beach and the park creating an urban communal space that is accessible for all of Limassol.

According to reports, the project is part of a loan restructuring agreement between the Cyprus Trading Corporation Plc (CTC) and the Bank of Cyprus. The aim is to transfer the site to the bank after the required licences for Aura‘s construction have been approved. With licences in place the site should have a higher value, benefitting both CTC and the Bank of Cyprus that could reasonably expect to sell it at a higher price with licences in place.

The Ermes Group has announced that the Debenhams Olympia department store in Limassol is fully operational and will continue to function normally until 2020.