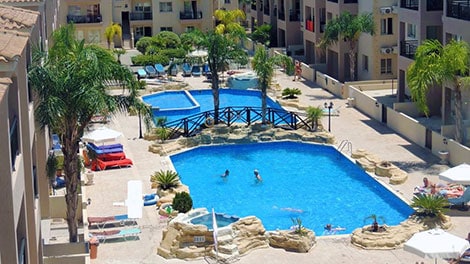 LAST summer, the private apartment complex, the Royal Seacrest in Kato Paphos, fell victim to Cyprus’ overly stringent regulations on swimming pools and had to close one of its major attractions.

Barring a miracle, summer 2019 promises more of the same: swimming will be banned.

The Royal Seacrest is a 104-apartment complex with two communal pools. Most of the apartments are used by holiday makers and only three owners and a handful of long-term renters live at the complex full time.

There was no warning that the two pools, which are separated by a bridge, may not be ‘legal’ until the municipality turned up to do an inspection last August. They told stunned owners the complex didn’t have the necessary swimming pool operating licence because the pools are regarded as public ones.

“This might be their definition, but it is only for use of our complex,” said Eoin Morgan, owner of one of the apartments and chairman of the complex’s management committee.

Authorities recognise only two types of pools. Private pools are those at a house that exclusively serves the needs of the family living there and their guests. Public pools are all other types, including shared pools catering for complexes like the Royal Seacrest. As such they are bound by the welter of regulations one would expect for obviously public facilities such as municipal swimming pools.

“We also need a sanitation certificate, three lifeguards, a health and safety supervisor and a responsible person, and this cannot be a committee or association under the law,” said Morgan.

“In the unfortunate case of a drowning, this person can be liable for criminal negligence and could be prosecuted. This is a big stumbling block for us.”

He added that it is also impossible to find a lifeguard as they are in high demand and even Paphos municipality struggles to employ enough for their needs.

Such stipulations all add up to thousands of euros in extra costs each year and has long led to calls for changes to the swimming pool law so that they are in line with more generous EU regulations.

“All swimming pools are regulated by the legislation and those not complying are in the process for legal action,” said Christos Christou, Paphos municipality’s public health Inspector.

Measures taken by the municipality vary depending on the seriousness of violations. They include both temporary and permanent closure of pools.

“There are also provisions to take the case to the court,” he said.

He said that municipal health inspectors visited almost all of the ‘public’ pools within the municipal boundaries in 2018 and discovered that more than 170 were not covered by any pool licence.

“The absence of lifeguard, no building permits or a certificate of final approval and so on, means that the municipal services are obliged to take the owners or managers to court,” he said.

Paphos municipality is following the law and local authorities have to implement the legislation, he said.

“So whether the legislation is against the European one or there are problems arising from the implementation, this is nothing to do with the municipality.”

Christou added that swimming pools operating at hotels or large projects normally have an operating licence and no serious deficiencies were identified during the inspections of 2018.

Peyia councillor, Linda Leblanc, told the Cyprus Mail that she has long been campaigning to get Cyprus legislation to differentiate between private yet communal pools and those clearly open to the public at large.

She said the process to change the law should be easy enough as EU standards differentiate between pool use and does not allow for just two ‘types’ of pools as Cyprus does.

“I have been lobbying for this law to be changed for years and now it’s time to bring it up again. Cyprus has an obligation to adopt the EU regulations and I have been campaigning for this since 2007,” she told the Cyprus Mail.

Extensive requirements need to be met in order to be granted a licence, and most communal pools in Cyprus fall short of meeting them. It includes particular construction requirements and facilities, a qualified lifeguard on duty and a professional pool maintenance supervisor. The lifeguard, for each pool, must be on duty at all times during the pool’s operating hours.

But under EU standards, complexes that share a swimming pool for the use by the property owners, their guests and families are classed as a Type 3 swimming pool. This means it is covered by different standards to that of a public swimming pool.

“It wouldn’t require lifeguards and the other stipulations.”

Under this European standard, ‘public’ pools are defined as “open to everyone or to a defined group of users, not solely for the owner’s/proprietor’s/operator’s family and guests independently from paying an entrance fee”.

Twelve years ago, Leblanc, along with members of the Cyprus Property Action Group, wrote a letter to the then minister of the interior raising the issue, which she has brought up intermittently since, but as yet, nothing has happened.

In the meantime, Peyia municipality has taken an easier line than Paphos. After discussion with the mayor, Marinos Lambrou, Leblanc was assured that no prosecutions of communal pools in Peyia would be made.

“The mayor and council and very aware of the situation and something need to be done, this law needs to be amended urgently, the law is used all over Europe.”

None of which helps Morgan and others like him.

The complex’s committee decided it had no choice but to close the Royal Seacrest’s pools, surrounding them with locked fencing, which cost 7,500 euros, and a large sign reading ‘Swimming strictly prohibited’. Owners were informed that it would remain closed until a licence is obtained which under current legislation seems a highly unlikely outcome.

“It’s not that we don’t want to comply with the law, we do, but it seems impossible to do so and the cost is astronomical. The start of the season is fast approaching and we can’t see a light at the end of the tunnel,” Morgan said, adding that many of the apartment owners rely on income from renting out their proprieties.

Around one thousand visitors went through the complex during the high season last year and he said many won’t return because the pool is closed, although tantalisingly full of water and maintained.

“This will have a real impact on tourism if it continues, especially businesses nearby,” he said.

“We estimate that our communal fees would have to increase at least a 25 per cent to be able to comply with all of the requirements.”

Morgan said that despite numerous ‘polite’ meetings with the municipality, their position is that the law is followed. He said he is aware that many other people are flouting the law and their pools remain open, but since the committee has been made aware of the requirements, they wouldn’t take that stance.

“Imagine if we ignored the law and something happened.”

Green party MP, Charalambous Theopemptou, told the Cyprus Mail that no new legislation has recently been discussed at Parliament.

“The issue has been discussed for more than a decade and draft regulations were proposed but nothing came of it,” he said.

A petition calling for a fair and reasonable review of the swimming pool regulations for apartment complexes and resorts was set up last August. It has so far garnered over 4,400 signatures but needs another 4,000 to ensure that the government will investigate the matter.