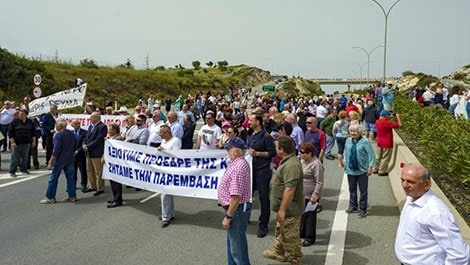 THE COMMUNITY of Pissouri blocked the Limassol to Paphos highway on Sunday morning to demonstrate against the lack of compensation from the state for homes that are slipping down the hillside.

Demonstrators held banners over a bridge on the highway near Pissouri, while others stood in the road blocking traffic.

“The protest is taking place as we consider that the state is delaying to solve a problem that should have been resolved some time ago,” said community leader of Pissouri Lazaros Lazarou.

The person who is losing his house has no time to wait, he added, and the community expects the immediate support of these people, and support of the area so that the problem does not get worse.

“We demand what has happened in similar cases in other villages in Cyprus, where the state, in worse times than we are now facing, has moved entire villages. For us it is just one neighbourhood,” he continued.

He said he hoped the demonstration showed those who need to take the action to do it immediately as the demonstrators are prepared to step up measures.

One of the affected homes in Pissouri

Lawyer for the home owners Elina Zoi said according to the district office six homes have been branded too dangerous to live in while another 40 face problems, among which 15 are considered dangerous even though the owners continue to live in them as they have nowhere else to go.

“With the heavy rains this winter the situation has got much worse. The number of residents affected increases day by day,” she added, saying that every month the land moves by 30cm and problems are exacerbated by issues with electricity and water supply.

There is also an issue with the condition of the roads worsening, which means even those whose homes have no problems face difficulties.

In February the government agreed to compensate home owners in the Limnes area and to carry out a geological survey on the area.

After this announcement Greens’ MP Giorgos Perdikis said that the government moves at a snail’s pace. By the time measures are taken, he said, most of the buildings will have collapsed leaving scores of residents without a home.

In 2015, some of the property owners formed the Pissouri Housing Initiative Group (PHIG) and paid out thousands of euros to obtain studies and papers from various renowned international experts and also satellite imaging, at a cost of €25,000, which measures the movement of the land. According to the study, the movement is up to 40cm per year, which is a lot when it’s pressing against a house.