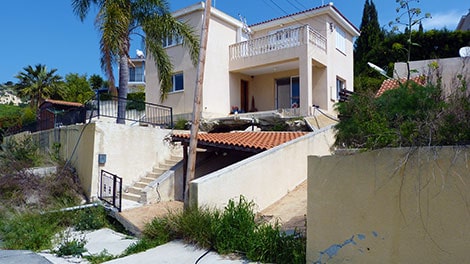 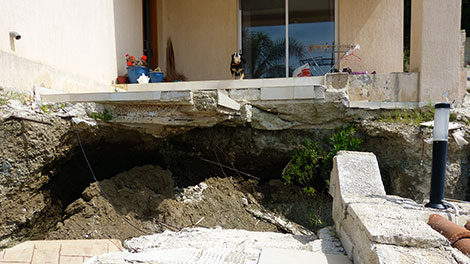 A BRITISH couple who bought a dream villa in Paphos that is now falling apart around them is suing the Cyprus government for allowing a housing complex to be built on unstable ground.

Simon and Jenny Phillips left the UK behind to buy their €228,000 home, in Armou village, Paphos district, in 2008 but the earth beneath them started to give way.

Now the couple and their two teenage daughters are stuck in ‘a cross between a building site and warzone’ – as their luxury home continues to slide downhill.

Simon Phillips, 50, an IT consultant, sold everything to buy the villa – but it was less than two years before cracks began to appear.

Now parts of the property, have slipped more than six feet below the earth – and the family, from Hemel Hempstead, Hertfordshire, are the only ones left on the development after five other British households deserted their crumbling homes, the UK’s Mail Online reported.

Simon Phillips argues the Cyprus government should not have allowed developers JNM 4U to build on the clay-based site at Armou in 2004, with an independent engineering report later finding the soil was ‘problematic’.

The report said the government was aware of the Armou site’s ‘geological problems’ and allowed the developers to build without taking ‘necessary precautions to stabilise and secure it,’ the Mail Online reported.

The developer is now defunct, but the distraught family are suing the Cypriot government for the value of their home – which experts believe could cost €240,000 to repair.

“No one in their right mind would buy this house or any of the other homes on the development,” Phillips told the Mail Online.

“We’ve had countless sprained ankles over the years, the place is just so dangerous…We can’t get to the front door because there’s a crater a few yards deep in front of it.”

Simon Phillips said he is ‘racked with guilt’ over the decision to relocate his wife, a 50-year-old waitress, and daughters – a 17-year-old student and 19-year-old animal rescue volunteer.

“I carry a huge amount of guilt with me all the time. I have ripped myself apart about this. Our dream has been ripped away from us. The life we wanted for our kids has been taken away.”

The independent report carried out in 2014 found the home ‘unfit for habitation,’ but the family continue to live there in defiance of a government order banning them from staying, the Mail Online said.

“We can’t afford to move house. Even though the whole hillside could one day slip down the valley, we have nowhere else to go and I am not making my family homeless.

“When we first moved out here I felt like the luckiest man alive, but this has just become a nightmare we are trapped in,” said Simon Phillips.

Lazy British expats or those with a fear of government offices have been chided by the British High Commission for not getting their residency...
Read more
Articles

No better way to shoot yourself in the foot

The 'Cyprus Papers' revealed by Al Jazeera that humiliated the administration should be a wake-up call to everyone on this island that the goose...
Read more
News

The names of 25 of the 26 investors from whom Cyprus is in the process of revoking citizenship have been named; nine Russians, eight Cambodians, five Chinese, two Kenyans and one Malaysian.
Read more