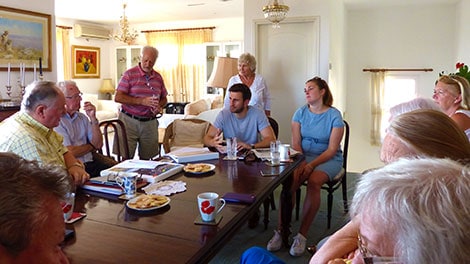 YESTERDAY homeowners in Pissouri where a landslide continues to destroy their lives and homes met reporter George Odling and photographer Georgie Gilliard from the UK’s Daily Mail newspaper.

The two heard how the landslide had devastated many lives and put an enormous strain on people’s health, relationships and finances

Homeowners had sought medical help for the stress the situation is causing them, others had seen their marriage break apart, a mother with two young children whose marriage failed returned to the UK penniless and they are living in rented accommodation. She has applied for council housing and is currently on the waiting list.

One of the Cypriot families bought their Pissouri home with the aid of a mortgage from a bank. When it was damaged by the landslide, they asked the bank for a valuation. In 2015 the bank valued the property at €17,000 less €11,000 to remove the rubble, leaving them with €6,000. The valuer said he’d assessed the land as agricultural due to the geological problems in the area and noted (at that time)  that there was nothing wrong with the actual structure of the house. The bank reminded the family that, despite its low value, they had to repay their mortgage in excess of €200,000.

The landslide is moving daily. Homeowners have to endure constant breaks in their water, electricity and telephone supplies as the water pipes and cables continue break under the strain.

To date, seventeen homes in the affected area have been declared unfit for habitation and families have been forced to leave and find alternative accommodation.

The first area to be affected by the landslide was Limnes, which can mean lake when translated to English. This has given rise to numerous ‘fake news’ stories by elements of the media that the properties were built on land known for its lakes, which landowners filled in before selling, etc, etc. These stories are completely untrue. In fact Limnes is a relatively small part of the total area affected.

In addition to Limnes, the landslide affects other areas to the south of Pissouri village centre;  Sheromyli, Yiousouphis, Safires, Merika, Kalogeri, Merika, and Roes.

(Since I last visited the area in February, more homes have been affected. Kiminos street, which was passable in February, is now closed to traffic and the house at the top of the street close to the Pissouri amphitheatre, which was undamaged in February, looks close to collapse.)

Government response to the landslide

The Auditor General Odysseas Michaelides said that the complex was sold by “a single, well-known land development company which will now be relieved of its responsibilities”; this is patently untrue. (As he has not visited the area to see the damage for himself, I can only assume that he’s been given inaccurate information.)

The properties were designed and built by numerous architects, building contractors and property developers. (Some of those involved in the construction of the older properties have since died.) Independent structural checks carried out on the properties show there is no evidence of poor design or construction.

The Pissouri Housing Initiative Group (PHIG) commissioned an independent study by internationally recognised experts who concluded it’s a landslide triggered by uncontrolled groundwater and this was backed up by InSAR satellite imagery and analysis. A copy of this 22-page report, which contains the overwhelming and irrefutable evidence, is available on-line ‘Proving a landslide: ground behaviour problems at Pissouri, Cyprus‘ for US$30.

After George and Georgie completed their interviews and tour, I asked George for his thoughts on what he’d seen.

“It’s a lot worse than I imagined.” He said. “Photographs can only tell you so much but seeing it in real life; it’s striking” adding that “It’s incredibly tragic to see what were obviously beautiful homes that people looked to spend the rest of their lives in under the Mediterranean sun crumbling like this”.

I asked him what he thought of the lack of support from the government. As he had yet to speak to the Interior Minister, he couldn’t comment. But he did say “It’s obviously disappointing that people feel they didn’t have the help they expected and feel they’re on their own.”

The full story should be published in the UK’s Daily Mail early next week.