Help for some Pissouri landslide victims 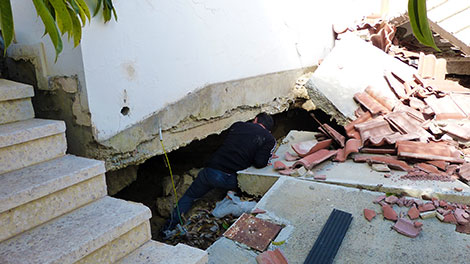 THE GOVERNMENT on Monday pledged ad hoc financial assistance to residents of Pissouri whose properties are damaged by the unstable ground there, but stressed that this was not compensation per se.

During a discussion in parliament, Interior Minister Constandinos Petrides said an amount would be disbursed to the affected homeowners in the form of ‘humanitarian assistance’.

It was not immediately clear whether this involved a one-time payment or a recurring imbursement.

For the time being, Petrides said, compensating the homeowners in Pissouri was being ruled out.

Compensation would imply the government is taking responsibility.

In the meantime, a study is to be launched to determine the causes of the problem. A call for tenders for the study is already out, with a July 12 deadline for expressions of interest.

The study would be conducted over two phases: the first lasting four months and focusing on the reasons for the phenomenon; and the second lasting 152 weeks and recommending ways of addressing the issue in the event that relocating the residents is not deemed an option.

Georgia-Elina Zoi, a lawyer representing the disaffected community, told MPs that since 2015 they have been struggling to persuade authorities that the issue is a landslide and not soil subsidence.

She said the phenomenon is impacting not only houses but also electricity cables and roads which have no overlying structures.

The land shifts by approximately 30 centimetres a month, Zoi added. And following this year’s heavy rains, many more residences have been affected which previously had not been.

She said a study by the Geological Survey Department has already demonstrated that the issue is a landslide, due to an absence of infrastructures to manage groundwater – meaning the problem can be attributed to an omission by the state.

The lawyer said the Interior Minister wants to provide financial assistance to only 17 homes, whereas the properties actually affected are far more.

The residents want their properties to be relocated.

Speaking to reporters later, Greens MP George Perdikis censured the government for its ‘stinginess’ in dealing with the Pissouri community.

In his opinion, the landslide is a geological phenomenon. But although developers and contractors may be culpable in some cases, it was implausible that this was the case across the board, especially since the land is shifting in spots where no structures exist.

Many homes in Pissouri have virtually collapsed, the result of a continuous and accelerating landslip. Seventeen homes are now deemed unfit for habitation.

Critics say the Auditor-General referred to the unstable area as ‘Lakes’ (or ‘Limnes’ in Greek, meaning small brook or water spring), whereas a parliamentary committee had recently identified that the whole of southwest Pissouri – about one million square metres – is unstable due to landslide.

What caused the landslide?

The Auditor-General insists that the destruction of homes is due to errors made by structural engineers who designed the substructures of homes.

As the photograph below clearly shows, he is wrong. The destruction of homes is due to the incorrect planting of olive saplings, which has caused the ground to open up while slipping following its natural slope. 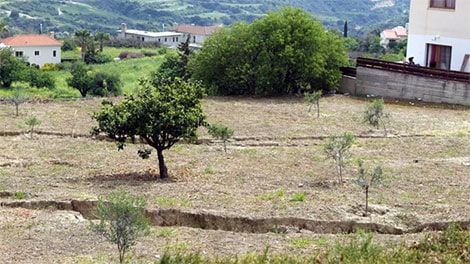 Whoever planted these olive saplings needs to compensate the owners of the homes they’ve destroyed or damaged as a result of their negligence!

A plan for all reasons