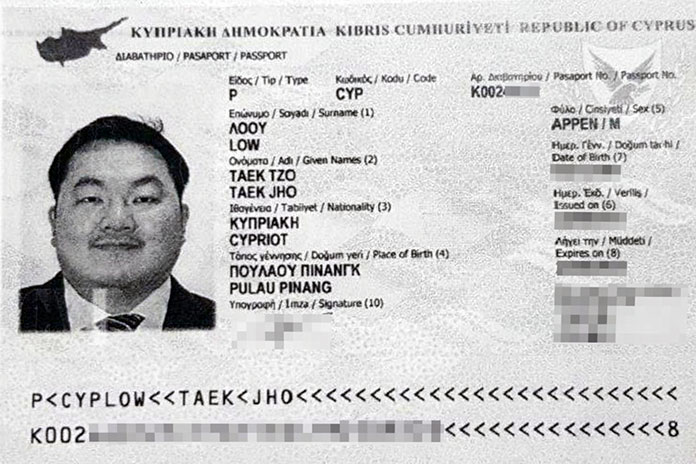 REPORTS have emerged that fugitive businessman Low Taek Jho or Jho Low is now moving around under a Cypriot passport.

According to Cyprus based Greek-language newspaper Politis, the businessman linked to the 1Malaysia Development Berhad (1MDB) scandal had also been a Cyprus citizen for the past four years.

The report, reproduced by the Sarawak Report blog, said Low had obtained the passport through a well-known citizenship and passport broker in 2015.

The firm had previously commissioned a passport from the Caribbean island-nation of St Kitts & Nevis.

According to Politis, Low had arrived in Cyprus on Sept 18, 2015 and obtained his passport through the council of ministers two days later under an investment scheme after investing in some property in the Famagusta district said to be worth €5 million (RM23.2 million).

He was not wanted at the time in connection with the 1MDB scandal. Interpol did not issue a red notice until a year later.

The claim that the fugitive businessman holds a passport and citizenship from the Mediterranean nation comes days after a local portal reported that Low had been offered asylum in the United Arab Emirates and had been shuttling between the Middle East and Europe since June.

However, Inspector-General of Police Tan Sri Abdul Hamid Bador said it was “illogical and impossible” for the fugitive businessman who is wanted for the “crime of the century” in the 1MDB scandal, to enter the UAE so easily.

The top cop said this as the middle-east nation has a very tight security system at its airport and the police over there work very closely with their counterparts in Malaysia.

It was reported that the US Justice Department had reached a deal with Low to recover almost a billion dollars in assets that was misappropriated from 1MDB.

The deal did not include an admission of guilt or wrongdoing and isn’t tied to the criminal action against him.

Low faces charges in the United States as well as Malaysia over his alleged central role in the scandal.

Malaysian and US investigators say that at least US$4.5 billion was misappropriated from 1MDB by Low and other high-level officials of the fund and their associates. Wall Street bank Goldman Sachs Group Inc, which acted as an underwriter to the fund, has also been embroiled in the scandal.

Archbishop intervened in naturalisation of Malaysian financier by Melissa Hekkers

The report, which was published earlier today in in-cyprus.com, notes:

It appears that the naturalisation of Malaysian financier, Jho Low, wanted internationally for fraud was materialised with the intervention of the Archbishop. According to a report in the Politis Newspaper in September 2015, the Archbishop had sent two letters to then-Interior Minister Socrates Haskikos, requesting the naturalisation of the Malaysian national, citing discussions about investing in church land.

According to the report, Jho Taek Low came to Cyprus, attained the Cypriot passport and citizenship and disappeared after investing 5 million euros in a villa in Ayia Napa.

It’s worth noting that the Malaysian national was wanted for financial scandal at the time he was granted citizenship, but this did not prevent the Council of Ministers from unanimously approving his naturalisation.

The report, which was published in the Cyprus Mail, notes:

Authorities should revoke the passport issued in September 2015 to a Malaysian businessman, now wanted by authorities in his country and elsewhere, President Nicos Anastasiades said on Monday.

“Absolutely yes,” Anastasiades told a reporter asking about the case of Malaysian fugitive Jho Taek Low that broke over the weekend.

But first, he added, the necessary probe must be carried out, so that due process is followed to justify any revocations.