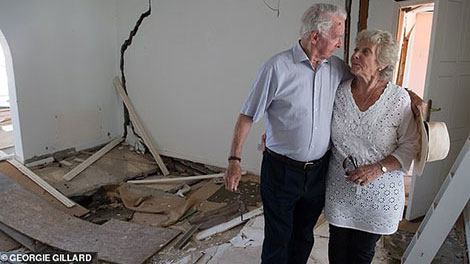 A GREEK-LANGUAGE newspaper in Cyprus has demanded €2,000 from the Pissouri Community Council to publish a letter correcting the fake news it reported on Saturday 7 March in connection with the landslide in Pissouri.

This particular journal continues to regurgitate fake news stories pointing the finger of blame for the damage caused by the landslide at the numerous contractors who built the properties more than 20 years ago. These fake news statements include:

These statements are totally untrue and we wonder why this newspaper, which knows better, continues to regurgitate this fake news?

Angered by these continuous fake news reports, the Pissouri Community held an emergency meeting on Sunday 8 March to consider their response. It resolved to write to the newspaper.

To the Pissouri Community’s horror and disgust, the Greek newspaper demanded €2,000 to publish the 3-page letter plus the map. (Click here to read the full text of the letter in Greek and plans.)

What sort of disgraceful outfit is this – demanding payment to correct the fake news they’ve been promulgating!

(A couple of years ago when the paper started publishing the litany of lies, I contacted the journalist who wrote the article inviting him to visit Pissouri to see the damage for himself. He didn’t show me the courtesy of replying.)

There follows an English translation of the Pissouri Community’s letter:

“In response to published articles, the Technical Advisor of the Pissouri Community on the matters related to the landside, Associate Professor NTUA Konstantinos Loupasakis, points out the following:

1) The study of the drilling profiles of the Geotechnical Drilling of the Geological Survey Department does not reveal the presence of made ground in the area of the Limnes. Specifically, in the Limnes area, from 2013 to 2018, 14 geotechnical boreholes have been drilled by the Geological Survey Department. These drillings reach depths of 18.0 to 67.5 m.

Of all the above boreholes only one reports the presence of 2.5m thickness of backfill. This borehole (EG2013 / 024) has been drilled on the slope of the stream running south of the Limnes area and at a distance of 50m from the nearest residence. These materials are most likely to come from the foundation excavations of adjacent houses. The distribution of Boreholes is shown in Figure 1 and it is clear that they cover most of the area. Therefore, according to the Geological Survey Department, there is no substantiated claim that the area of Limnes was located on backfill / made ground.

2) If the houses were built on uncompacted made ground deposits (debris) then deformations would only be found to the extent occupied by the houses and not in their wider surrounding area or in the public and private spaces surrounding them (road network, paved areas and open spaces).

As can be seen from the distribution of cracks in the land mass in the Limnes area (Figure 2), the affected houses are undermined by the above cracks spanning a series of buildings and open land. Therefore, cracks in the land mass and damage to homes cannot be related to the individual foundations in the area of a house. On the contrary, the mass distribution of tension cracks indicate that there is extensive landslide in the Limnes area, the boundaries of which are clearly distinguished from their distribution.

3) From the Geotechnical Survey Department’s boreholes, it is shown that the maximum thickness of the designated ” landslide mass ” reaches up to 18.5 m while soft and disturbed (apparently by landslide) debris reach depths of up to 40 m ( eg EG2013 / 024). Also, from the borehole descriptions there are clear traces of sliding surfaces up to depths of up to 39m. Meaning, that according to the data from the boreholes, the land has failed up to 39m in depth historically and has potential to continue to do so.

Given this, no economically viable foundation technique can be applied to two-storey or three-storey houses in order to make them unaffected by such a large and deep landslide. It is therefore not a question of the wrong choice of foundation for construction.

4) Regarding the quality of the construction, it is noted that, although not the subject of this expert opinion, many structures were found during the study, which, while undergoing extensive displacement, were subject to minimal to zero damage. That is, there are houses which whilst rotating or deviating from the vertical, are intact. This confirms their high quality of construction. Obviously elongated constructions that are interspersed by a series of tension cracks in the soil, regardless of their quality cannot be left unaffected. Undoubtedly, in constructions with these characteristics, a high level of damage is recorded.

In conclusion, it is noted that a large and deep landslide is taking place in the Limnes area, which is impossible to resist by any standard methods of construction. There is also a landslide movement that was impossible to identify in the context of a geotechnical study for the foundation of a two to three story construction. A geological suitability study should have been carried out in the area prior to its designation as a residential area.

At this stage and given that a special study is being carried out to stop the landslide movements, the only measure that can be applied with immediate effect is the drainage of the area from groundwater. This action will increase the shear strength of the landslide materials and slow down ongoing movements. The study will then outline the further steps to be taken.

It is noted that the development of landslide movements not only affects the smaller area of Limnes but also threatens the stability of the slopes surrounding the landslide and built up areas.

Further details on the landslide movements in the Limnes area, the stability of the surrounding slopes and all the proposed measures can be found in the expert report drawn up in the Rep. NTUA Professor Konstantinos Loupasaki.”

To date, no humanitarian aid has been deposited into any the landslide victims accounts.

The survey of the Greek Company (Omikron Kapa Meletitiki) continues; the lawyer who is acting on  behalf of the residents affected contacted them after the article was published.

The company advised that they are working to a schedule and their report will be finished and delivered to the Ministry at the end of April. Currently they are digging more boreholes in the area, installing inclinometers and investigating the landslide.