No better way to shoot yourself in the foot 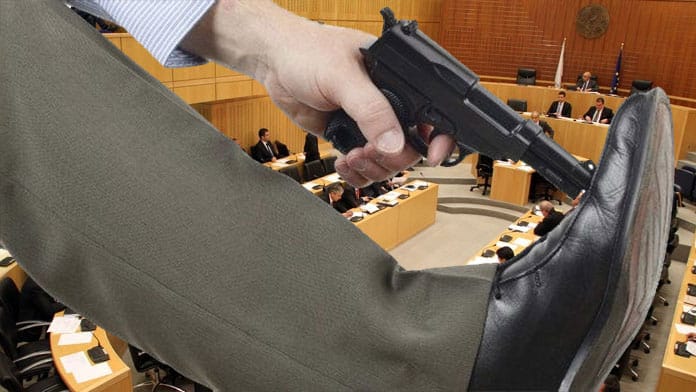 The ‘Cyprus Papers‘ revealed by Al Jazeera that humiliated the administration should be a wake-up call to everyone on this island that the goose that lays the golden egg has long gone.

It was probably cooked by some oligarch and the prize of a banquet with local politicians, lawyers and accountants.

It’s time to move on and ‘rediscover Cyprus’, not just as a tourist destination, but as a vibrant business model.

The services model of the 1970s, conceived out of a necessity to restart the economy in the wake of the Turkish invasion, which decimated our farming and destroyed half the country, is far outdated and should be mutated into something new.

A low-tax programme was developed to help Cyprus rise out of the ashes of the 1974 war.

It started well and soon spun off into two main areas – the ‘offshore sector’ with the “best-kept secret” and the shipping sector.

Both did well and attracted thousands of companies and personnel to place their business under the Cyprus tax umbrella.

By the 1980s, we had the expats who operated financial service companies.

Regional and global events, such as the Lebanese civil war, the collapse of the Soviet Union, the dismantling of Yugoslavia and others brought foreign communities to our island, transforming Limassol into a bustling multicultural port city, with brass-plate companies registered in every building in every neighbourhood.

Despite being ripped off with exorbitant rents, some stayed, while newcomers arrived bringing with them the benefits and ills of the lands they left behind.

However, our services sector, driven by complacency and the need for a quick buck, did not evolve as fast and gradually saw business going to rival destinations, the exception, again, being the maritime sector which started to become a proper hub.

In the meantime, we had the fallout from the first Gulf War in 1990-1991, the stock exchange boom and bust in 1999-2002, and a chain of economic aftershocks from the collapse of Lehman Brothers, culminating in our locally nurtured banking and financial crisis.

Throughout these troubles, the services survived and provided some cushion of safety.

However, this sector kept on losing ground to smarter and more versatile jurisdictions while the maritime industry quietly and safely evolved.

The final nail in the services coffin was the golden passports scheme, devised by a few to accommodate the few, lubricating the legal and financial services professions.

But this time it helped to save the over-borrowed property developers, who had earlier bankrupted the banks, exposing them to billions in non-performing loans which ordinary depositors were called to bail out.

After harshly criticised from day one, and with some government officials still keeping their heads in the sand, the investment-for-citizenship programme was adjusted to allow a small measure of transparency, a smokescreen for all those pointing their fingers at the evil Cypriots.

Instead of abolishing the programme altogether, another variation was concocted whereby a fraction of the €2.5 million ‘invested’ in Cyprus would be used to fund low-cost homes and some money trickling into innovation and research while we ‘sacrificed’ the project by lowering the ceiling to ‘only’ 700 passport applications a year.

European funds have been well invested in many areas of agriculture and rural Cyprus, manufacturing, albeit in specialised sectors are on the rise and some success stories, such pharmaceuticals and energy, are booming.

Shut the golden passports scheme down now, before it’s too late and we are humiliated even further, especially by our European partners, in whose eyes we are nothing but a joke.

If not, it just goes to prove that the present administration still has a few favours to pay off and needs to keep the programme going a while longer.

Lazy British expats or those with a fear of government offices have been chided by the British High Commission for not getting their residency status sorted bef...
Read more
Investor Centre