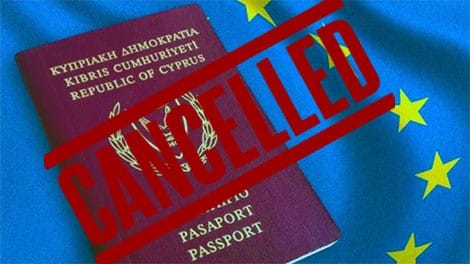 Cypriot authorities have identified seven individuals or foreign investors who could potentially be stripped of their Cypriot citizenship, after an internal probe pointed to forged documents or misleading information during the golden passport application process.

The President’s Cabinet this week gave the green light for the initiation of the process for recommending the revocation of golden passports granted to seven persons through the Citizenship by Investment Programme.

The probe findings suggested that Low, who was implicated in a huge scandal that landed Malaysia’s former prime minister in prison last summer for 12 years, had obtained his Cypriot passport fraudulently and based on falsified information.

Archbishop Chrysostomos of Cyprus had also accepted a donation for the Church from Low, while the financier is still wanted by Malaysian authorities on theft and embezzlement charges to the tune of 10 billion.

Two other naturalized investors who could lose their Cypriot citizenship are father-son duo Mehdi Ebrahimi Eshratabadi and Maleksabet Ebrahimi from Iran.

Iranian-born Eshratabadi, who is also a Canadian citizen, reportedly applied in Cyprus as Tony Newman, according to the probe, while failing to disclose that he was wanted for money laundering before receiving his passport as well as those for family dependants.

Cambodian businesswoman Sopheap Choeung is also on the list along with her husband Lau Ming Kan and her child, with reports saying the couple’s land development company had been involved in violent evictions.

Last year, Cambodia’s prime minister was involved in a scandal after photos emerged on social media of members of his inner circle who had obtained Cypriot passports in 2017. He had initially denied opposition allegations that they had other passports and lived the high life overseas with assets worth tens of millions of dollars.

The names of twelve others will be provided to police investigators who will be tasked with carrying out background checks to determine whether they were being accused of any serious offences.

Crimes involving moral turpitude as well as offences that carry over 5-year prison sentences could prompt authorities to recommend a passport revocation.

Local media said the investigative committee, chaired by Demetra Kalogerou, who is also Chairwoman of the Cyprus Securities and Exchange Commission, admitted in August that the cases her team had investigated were handpicked by the ministry and did not include all applications mentioned in other reports, including Al Jazeera’s The Cyprus Papers.

Kalogerou is required by a new law to contact the seven naturalized individuals on the list and seek their side of the story before making her recommendations.

Previous reports said some officials pointed to cases where allegations against some foreign investors might have been politically motivated, with some individuals whose names are also on the List of Seven reportedly denying any wrongdoing.

The final word rests with the President’s Cabinet that will have to decide on a case-by-case basis whether a passport revocation would be in order.

In addition to Kalogerou’s committee, a new probe is set to begin after an independent investigative committee was appointed to look into all passports granted through the Cyprus Investment Program from 2008 until July of this year.

(This article was first published in KNEWS, the English edition of Kathimerini Cyprus, on 8 October 2020.)