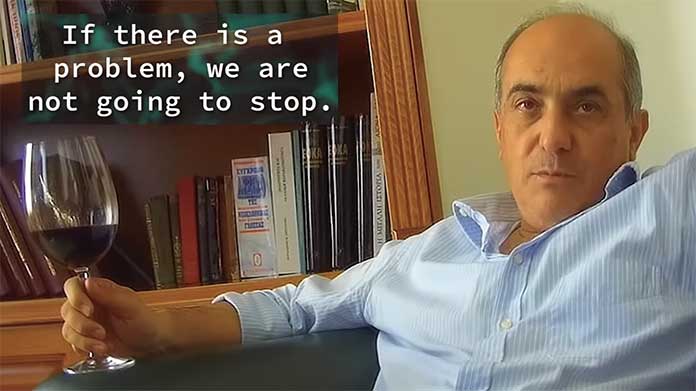 Cypriot parliament speaker Demetris Syllouris has lashed out at the Al Jazeera network, saying it tried to snare him in an undercover investigation into ‘golden passports’ under the Cyprus Investments Scheme.

The new 50-minute video, released on Monday, allegedly uses an investor described as ‘Mr X’ who is reportedly a convicted Chinese national, living in Hong Kong.

Syllouris said he met the person socially, a year ago, during an event hosted by property developer and MP Christos Giovanni.

“He did not give details about himself and said he was interested in investing in infrastructure projects, without elaborating further or revealing his source of funds. This raised suspicions,” the House speaker said Monday.

“There is nothing improper about my meeting with Mr Giovanni. We have known each other for years and often meet socially,” Syllouris said.

He argued that Qatar-based broadcaster Al Jazeera did not do investigative journalism, “it does other things.”

Sarah Yeo from Al Jazeera’s Investigative Unit contacted local media saying they would “broadcast an undercover film that reveals in detail how a fugitive from justice might obtain an EU passport through Cyprus, for the right price.

“Posing as representatives of a fictitious criminal character, our undercover reporters were ushered through the application process for the Cyprus Investment Programme by lawyers, property agents, leading eventually to high ranking politicians.”

“The evidence presented in the film is deeply concerning, particularly when set alongside the findings of our Cyprus Papers investigation which in August, identified high-risk individuals including criminals and politically exposed persons who acquired Cypriot citizenship through the investment scheme.

“The story will lead Al Jazeera’s news bulletins (Monday) and I’m hoping there will be a strong reaction to our findings from across Europe,” Al Jazeera’s announcement said.

Al Jazeera claimed that “among those involved are the speaker of parliament Demetris Syllouris and member of parliament, Christakis Giovani, who is also one of the country’s largest real estate developers”.

“Our path to achieving a passport for our criminal applicant culminates with meeting the president of the Cyprus parliament, who holds the second-highest office of state.”

After being briefed about our applicant’s criminal background, Demetris Syllouris says to our undercover reporters, “You have my full support.”

When asked if the criminal applicant will receive a passport, he replied, “I cannot say 100% but I say 99%.”

The spotlight once again fell on the ‘golden passports’ scheme as a series of unflattering articles and videos were published by Al Jazeera in August which essentially portrayed Cyprus as selling passports to criminals for cash.

The expose was based on the leak of over 1,400 documents related to the investment scheme, obtained by Al Jazeera, which in photos, appear to bear the seal of the Cyprus Parliament.

In an initial response, the Cyprus government refuted Al Jazeera’s claims as propaganda, with Interior Minister Nicos Nouris arguing they only served to damage the island’s economy and reputation through “deception” and “false information”.

The government had accused the Qatar-based broadcaster of engaging in propaganda and seeking to smear the island’s reputation, citing its political ties with Turkey.

It has since launched an independent inquiry to examine all 4,000 applicants since the scheme began in 2007.

Last week, the cabinet said it would revoke seven passports of foreign investors who falsified information on their application.

Twelve other suspect applicants have been referred to the police chief to check if they are wanted overseas.

Cyprus Citizenship for Investment Scheme is under scrutiny once more following revelations the cabinet approved the naturalisation of 42 relatives of a Saudi businessman...
Read more

This site uses Akismet to reduce spam. Learn how your comment data is processed.