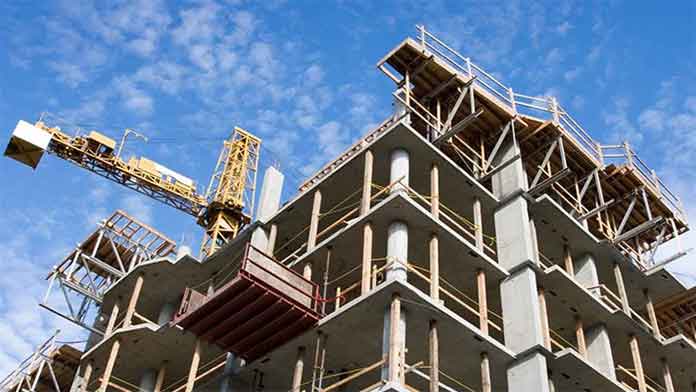 Following the demise of Cyprus “golden passports” scheme compounded by coronavirus the construction industry is suffering but has options.

The sector is relying on housing developments and offices for companies attracted to Cyprus post-Brexit.

Although the sector is in for a turbulent year, experts say it can be saved by housing demand, especially in the Nicosia and Famagusta district while authorities try to convince large firms with UK bases, to relocate to Cyprus.

Construction saw its overall activity decline in October with approved building permits dropping 15.5% to 583 from 690 in the previous month of 2020, although Nicosia and Famagusta districts made gains from Cypriot buyers.

According to official data, the value of building permits rose to €279.3 million in October from €201.6 million in the previous month.

The rise in both the value and total area attributed to more large projects for which permits were issued in October.

Larnaca registered the largest annual decrease in building permits with a 14.5% dip year on year as permits issued dropped to 768 from 898 in January – October 2019.

Building permits constitute a leading indicator of future activity in the construction sector.

“There is clearly a satisfactory demand from the domestic market, especially for housing projects of up to €400,000,” said Savvides.

He attributed this activity to government subsidising part of the interest rate of new housing loans.

The real estate-oriented measure launched by the government last year foresees a 4-year subsidy of the interest rate (up to 1.5%) for housing loans with a loan value of up to €300,000.

“This is backed by reports of an increase in housing loans given out by banks in the past year,” argued Savvides.

The Brexit effect on construction

He added that the sector is also betting on firms relocating their headquarters along with their personnel.

“Foreign Direct Investments are extremely important for the Cypriot economy.

“The success of efforts put forward by the authorities to attract foreign firms to Cyprus, luring them with incentive schemes, will be decisive for the future of the industry,” noted Savvides.

He said these companies will need ‘Grade A’ offices while their staff will need homes which means business for the construction sector.

“However, this factor is the great unknown for the future of the industry.

“Working from home during the coronavirus crisis has added a new element to corporate life, which no one knows how it will play out.

“For sure remote work is here to stay in one form or another.”

Savvides said stakeholders have to be patient and monitor the market over the next couple of years, to have a clear picture of where the industry is moving.

Panos Danos CEO of Danos / BNPRE Group said 2021 could be a positive year for the real estate market with new opportunities for investments with pent-up demand for travel and leisure.

He said real estate prices and sales contracts, decreased in Cyprus, mainly because of the pandemic that caused national lockdowns and movement restrictions worldwide.

There are still big-ticket projects that add significance to the depth and calibre of the Cyprus property market.

Despite the citizenship scheme ending, Danos said this does not mean that Cyprus does not have other options to attract foreign investments.

“By no means should we revive the passport scheme. However, we can draw in businesses with our relocation incentives, with Brexit creating some opportunities.

“Companies doing business with the EU, but headquartered in the UK, will be looking into relocation options, with Cyprus having a lot to offer.”

A real estate analyst Nigel Howarth argues that it’s going to be a difficult year for the property market, mostly due to uncertainties surrounding the pandemic.

“But once COVID has been suppressed and travel starts to return to normal maybe the market will start to recover during the third quarter.”

Commenting on the impact of cancelling the Citizenship by Investment Scheme that had property sales at its core, Howarth argued it may not be such a big problem.

“It is possible to obtain Permanent Residency in 2 months by buying a new property from a developer valued in excess of €300,000, plus some other conditions.

“There’s no obligation to live in Cyprus, just need to visit every two years. If they want citizenship, they can apply after seven years of residency.”

Howarth said rumours in the real estate world, point to many British firms and nationals thinking about moving to Cyprus to escape Brexit.