PROPERTY sales in Cyprus this year have crashed 44 per cent compared with last year with the recession, record levels of unemployment and the unresolved Title Deed problems all taking their toll.

Figures published earlier today by the Department of Lands and Surveys reveal the extent of the problem. The number of contracts for the sale of property deposited at Land Registry offices across the island in October stood at 310 compared with the 454 deposited in October 2012; a fall of 32% from last year’s low levels.

Sales fell in all districts. Famagusta was the hardest hit with sales dropping by 53%. Sales in Paphos fell by 38% and those in Limassol by 37%, while sales in Larnaca and Nicosia fell by 20% and 9% respectively. 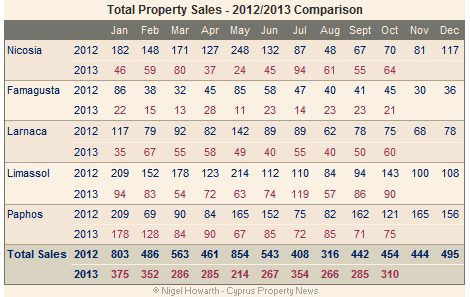 Domestic sales during October were down 32% compared with October last year, having fallen to 239 from 352; sales were down in all districts.

Paphos was the hardest hit with sales dropping 43%. Sales in Famagusta fell by 40%, those in Limassol by 34%, while sales in Nicosia and Larnaca fell by 23% and 18% respectively. 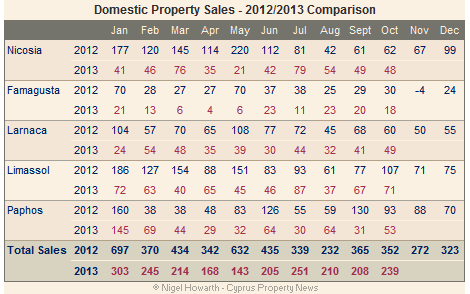 Amid the island’s deep recession and slowing economy, more than 76,000 are now out of work, with nearly 44% of those aged 25 or less. To cope with the soaring number of redundancy applications, the Labour Ministry is reported to have hired 45 jobless university graduates who have undergone special training.

Sales to the overseas market fell 30% in October compared with October last year, having fallen to 71 from 102. Although sales in the capital (Nicosia) doubled, sales fell in all other districts.

Famagusta was hardest hit with sales falling 80% compared with October last year, while sales in Limassol fell 47%. Sales were also down in Larnaca and Paphos, falling by 27% and 21% respectively. 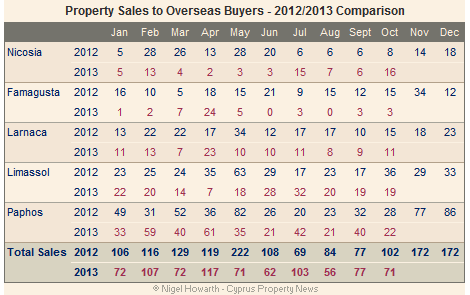 During the first ten months of 2013, property sales to the overseas market have slumped 30% compared to the same period last year falling to 808 from 1,132.

The Final Report and Recommendations by the Independent Commission on the Future of the Cyprus Banking Sector, which was released on 31st October, contains the following statement:

“We believe that Cyprus” small size could make recovery more achievable than in larger countries going through a similar process. For example, the unsold inventory of vacation houses is about 50,000. Provided prices are lowered sufficiently after repossession by the banks, an inventory of this relatively small size could be cleared quickly through sales to foreigners.”

In light of the fact that during the peak year of 2007 a total of 11,281 properties were sold to foreigners and that since 2009 the average number of properties sold each year to foreigners is approximately 1,600 – it seems somewhat naïve to say that the unsold inventory of 50,000 vacation homes could be cleared “quickly”.

Even with a massive reduction in prices, which would further depress property prices and their value as collateral, it is unlikely that these vacation homes will sell “quickly” unless they have their all-important Title Deed.