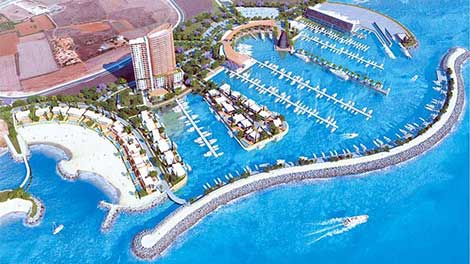 THE CONSTRUCTION of luxury residential twin towers which will be part of the new Ayia Napa marina will start in late September, Mayor Yiannis Karousos announced on Tuesday.

“It is expected that Egyptian tycoon Naguib Sawiri and his partners in Cyprus, namely the Caramondani group, will sign the contracts with the company building the marina in the next few days,” Karousos said. “The twin towers will consist of luxury apartments and suites and are part of the Ayia Napa marina infrastructure.”

After they sign the contract the building site in the Makronissos area will be fenced off and the foundation stone for the project is going be laid on September 23 or 30.

Advertising for the marina and the sale of houses and apartments has already started, the mayor added.

Karousos said the marina would have a capacity of 400 to 450 vessels with space out to sea for about 150 other boats. Regarding investments outside the marina, the twin towers will consist of 26 floors with luxury apartments. There will also be a number of luxury villas and a luxury hotel.

The mayor estimates the main marine facilities will be finished in three years and the rest in five years.

According to the mayor the area around the marina is now a hot investment area for big and serious investors and he expects investments by the government as well.

Tycoon Sawiri, Karousos said, stressed that he “is not interested in creating just a marina in Cyprus, but in creating the best marina in the Mediterranean.”