Home Articles Is buying property in Cyprus as safe as houses?
Articles

Is buying property in Cyprus as safe as houses?

WHEN you buy a property in Cyprus, your right to ownership is guaranteed under the law. Depositing your contract of sale at the Land Registry allegedly prevents the vendor from selling it to someone else; or does it?

According to the Cyprus Interior Ministry:

“The deposit of a contract of sale at the Department of Lands & Surveys creates an encumbrance of a great practical importance on the encumbered property. The subsistence of such encumbrance prevents the vendor from selling or charging any such property whereas the purchaser may obtain a judgment from the Court directing the registration of the property in his name, if the vendor refuses or fails to transfer the property within the time agreed as per contract of sale.“

This is supported by section 303A of the Cyprus Penal code which states:

“(1) Any person who, with intent to defraud, deals in immovable property belonging to another is guilty of a felony and is liable to imprisonment for seven years.

(b) advertises or otherwise promotes the sale or renting out or mortgaging or charging in any way to another of immovable property or the use thereof by another, or

(d) accepts the immovable property which is the object of the dealing as this is defined in the present subsection.

(3) For the purposes of the present section, a person acts with intent to defraud if, when committing any of the acts set out in subsection (2), that person knows or, under the circumstances, should reasonably have known, that he does not have the consent of the registered owner of the immovable property, or of any other person who has the lawful authority to grant such consent.”

What this means is that if you buy a property in Cyprus and deposit your contract of sale at the Land Registry, the person who sold it to you cannot sell it to anyone else or rent it, mortgage it, etc. If they do, they face the prospect of spending seven years in jail.

Indeed, Cypriot courts have used the law to prosecute people involved in the sale or purchase of property in the areas of the island under Turkish occupation. But for some reason the Cypriot authorities appear ‘reluctant’ to use this law in other situations.

Consider the case of Conor and Michaela O’Dwyer:

In 2005 Mr O’Dwyer and his wife Michaela bought a property in the village of Frenaros from a Paralimni-based developer. Their lawyer, quite correctly, deposited their contract of sale at the Land Registry where it remains deposited to this day – the Lands Registry reference is ??? 1064/2005.

During a dispute between the developer and Mr O’Dwyer, the developer re-sold the property to Michelle McDonald. This, according to the law, was illegal. 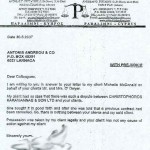 If you click on the small picture on the right you can read a letter from Ms McDonald’s lawyer confirming the sale of Mr & Mrs O’Dwyer’s home.

(As well as acting on behalf of Ms McDonald the firm was apparently representing the developer with whom Mr O’Dwyer was in dispute. It is therefore surprising that that the lawyer did not advise Ms McDonald of the fact that the property she was buying had actually been sold to someone else and for her to buy it would be illegal.)

On 24th August 2007, the Cyprus Mail reported that the (former) Interior Minister, Christos Patsalides, had ordered an investigation into the matter.

Last month, the police concluded their investigation. Subsequently the following letter was sent to Mr O’Dwyer’s lawyer by the Counsel for the Republic; it has been translated from the original Greek:

LEGAL SERVICE OF THE REPUBLIC

Further to our letter, file no. 93/1984/128 and dated 22/10/2008, we hereby wish to inform you that the Police have completed their inquiry, the file has been studied and it has been ascertained that no criminal offence has been committed.

It would appear that a precedent has been set. Although Mr O’Dwyers contract of sale was deposited at the Land Registry, the developer who re-sold it to Ms McDonald has committed no crime according to the police who investigated the matter.

This precedent raises a number of serious questions:

I’ll leave you, the readers of this magazine, to draw your own conclusions.