LATEST figures from the Department of Lands and Surveys reveal that a total of 394 contracts for the sale of property were deposited at Land Registry offices across the island during November compared with the 444 deposited in November 2012; a fall of 11%.

This monthly fall is considerably lower than those experienced in previous months and could be a sign that the slump in sales is slowing down.

Sales fell in all districts. Famagusta was the hardest hit with sales dropping by 37%. Sales in Larnaca fell by 31% and those in Limassol by 30%, while sales in Nicosia and Paphos fell by 24% and 18% respectively. 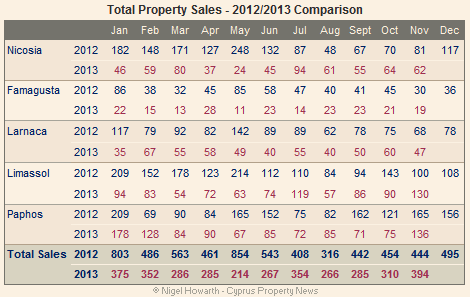 Domestic sales during November were up 10% compared with November last year, having increased to 298 from 292, resulting from increased sales in Limassol and Paphos of 39% and 9% respectively.

However sales in Larnaca fell by 26% and those in Nicosia by 15%. 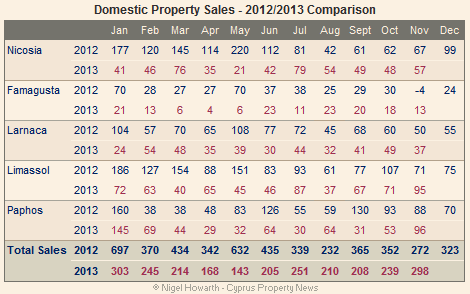 (Note the anomalies with the Department of Lands and Surveys November 2012 figures for Famagusta.)

Sales to the overseas market fell sharply in November compared with November last year, having fallen to 96 from 172 (-44%). Although sales in Limassol increased 35 from the 29 recorded in November 2012 (+21%), sales fell in all other districts.

Famagusta was hardest hit with sales falling 82% compared with November last year, while sales in Nicosia fell 64%. Sales were also down in Paphos and Larnaca, falling by 48% and 44% respectively. 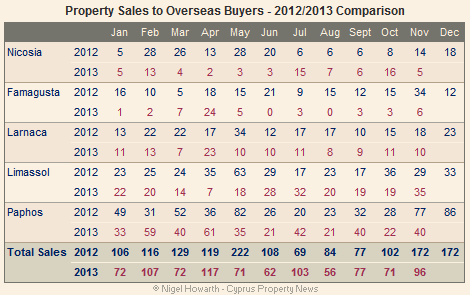 During the first eleven months of 2013, property sales to the overseas market have slumped 31% compared to the same period last year falling to 904 from 1,304.