Protest at the Cyprus High Commission in London 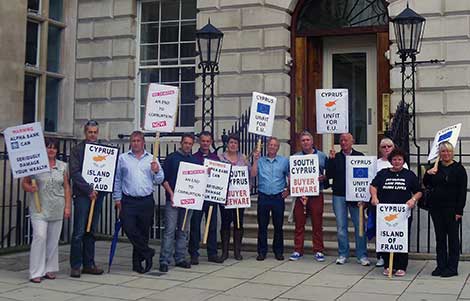 TIMED to maximise embarrassment to Cyprus by coinciding with its taking over the EU’s rotating presidency, a group of protestors held a peaceful demonstration outside the offices of the High Commission of the Republic of Cyprus in London’s St. James Square yesterday.

The wet weather didn’t dissuade the protestors who had travelled to London for the day from many parts of the UK including Aberdeen, Newcastle, Darlington, Stoke and Manchester.

Carrying placards reading ‘We demand and end to corruption now’, ‘Cyprus Island of fraud’ and ‘Cyprus unfit for the EU’ the protesters allege they have been defrauded or mis-sold property.

We understand that the Consul General invited a few of the protestors into his office for a chat. Although he said that would try and help in any way he can, his powers are limited.

We understand that further protests are planned in the coming months at UK overseas property exhibitions and Cypriots banks.