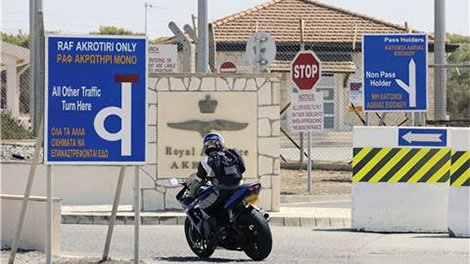 RESTRICTIONS are to be lifted on the development of locally owned property within British military bases on Cyprus, the island’s president said during a visit to London.

Nicos Anastasiades announced that a deal had been struck with the UK as he sat down for talks with Prime Minister David Cameron at 10 Downing Street.

“Our warm thanks and my appreciation for the historical agreement which has been signed today referring to the development of private property in the British bases,” he said.

Until now Cypriots were unable to make changes to homes within the boundaries of the UK Sovereign Base Areas at Akrotiri and Dhekelia, which count as British territory.

Mr Anastasiades also welcomed what he said had been Britain’s “prompt and decisive” actions in helping the country deal with its financial crisis last year.

Mr Cameron said that his efforts to secure reforms to the European Union would be on the agenda for the talks – as well as “the prospects for peace and reconciliation in Cyprus”.

The base areas, retained under UK jurisdiction when Cyprus was granted independence in 1960 as military not ”colonial” territories, are home to around 10,000 Cypriots.

Under the terms of the deal, they will now enjoy the same planning regime as other residents of the Republic of Cyprus – though with “appropriate safeguards” of UK military needs.

Around 60% of the 98 square miles covered by the base areas – 3% of the east Mediterranean island’s total land area – is privately owned.

The agreement was announced by Anastasiades on Tuesday during a working dinner with the Secretariat of the National Federation of Cypriots in the UK and was signed between Foreign Minister Ioannis Kasoulides and Foreign Secretary William Hague at Carlton House.