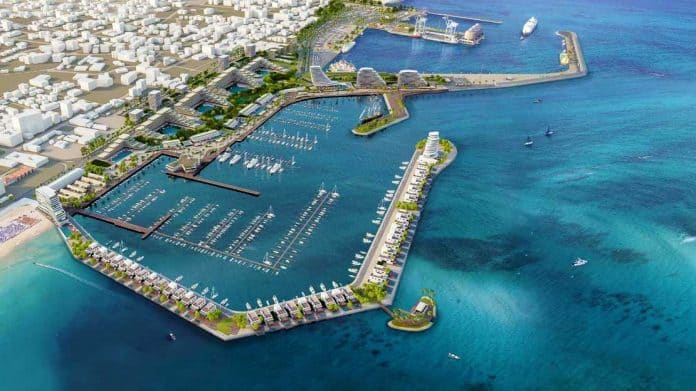 Following a three-year international public tender procurement, the Republic of Cyprus reached an agreement in March with a consortium known as Kition Ocean Holdings consisting of a Cypriot and an Israeli company, to redevelop and operate the historic Larnaca Port and Marina, the island’s largest infrastructure project of its kind.

With the signing of the Concession Agreement that is expected to be completed in early December, the process of the “transition period” will be activated in January 2021, which will last up to 12 months.

During this period, Kition Ocean Holdings Ltd in full cooperation with the Government and all competent authorities will proceed to secure all the necessary permits and approvals required by the contract, for the smooth delivery of the entire project to the consortium.

Construction work on the project is expected to start after the end of the “transition period”, i.e. at the beginning of 2022 and to be completed in four phases by 2037.

The first phase will last five years and among other things, aims to complete the new infrastructure works, so that citizens can use and enjoy the new spaces created.

These mainly include the expansion of the road network with the creation of a new road that will connect Athinon Street with Famagusta Street, the configuration of the coastal pedestrian street and the landscaping of the new green spaces.

Also, the works include the expansion and reconstruction of the existing Marina, so that it can accommodate 650 boats from 5 to 150 metres long and offer facilities such as boat repair and services.

The upgraded marina will also have the possibility to accommodate “mega yachts” up to 150m and approach a different clientele, which today seems reduced.

The works also include the construction of the Marina Yacht Club with offices, cafes, event venues, sailing schools, diving schools and navigation stores.

It is worth noting that the existing old pier of the Marina, after being maintained, will be harmoniously integrated into the premises of the new facilities.

The new upgraded Larnaca Port will now be able to accommodate ships up to 450 metres in length, such as luxury cruise ships, energy exploration vessels, military, and other merchant ships.

It is also very important that during the first phase, an ultra-modern passenger terminal will be constructed to serve large cruise ships, which will now be able to include Larnaca, within their cruises, as a unique leisure destination.

Completion of the project follows three phases of construction including luxury villas, imposing residential buildings with 360-degree unobstructed views, office buildings, a shopping area with restaurants and a traditional market where local producers will be able to sell their products in a pleasant environment.

In the second phase, we plan to build the educational element of this project of approximately 20,000 sqm of University Lecture and Research Theatres where a Medical School will co-exist next to a Medical Centre, a Hotel and Hospitality College and, finally, a Blue Marine, Environmental and Energy University.

Within the Port area, we plan to increase and improve existing storage facilities and create a secure area for high level/quality yacht repairs.

During the third phase estimated to take place before year 10 of this project, we will be constructing 45 Luxury Villas on the new breakwater with their own private berths.

On the same breakwater, we will build a state-of-the-art luxury residential lighthouse which will offer 360-degree views from all the apartments.

Such a project cannot be complete without the icing on the cake, which in our case will be the only Private Island in Cyprus.

During the final fourth phase, we will be constructing the western part of the Project which consists of several office buildings, parking spaces, studios and small-size apartments suitable for students or people visiting Larnaca regularly for work.

The magnitude of the economic importance of this project, for Larnaca and Cyprus in general, is calculated as follows:

For our country, the estimated Revenues are expected to reach €19.6 billion.

One of the main reasons that our company decided to proceed with the development of this project, is the fact that we consider the city and the wider area of ??Larnaca historic, beautiful and with great potential for development.

We believe that the innovative design of the various services that the project will offer to the residents of Larnaca but also to visitors from Cyprus and abroad will raise the image of the city.

Furthermore, we believe that this project will contribute to upgrading the tourist model of the island.

Our goal is to highlight the cultural heritage and the character of our island.

The creation of a traditional market within the project, as well as other spaces suitable to host social and cultural events will help positively in this direction.

With the operation of the new passenger terminal at the port and the hosting of large cruise ships, we are sure this will attract tourists from many parts of the world and contribute significantly to the upgrading of our tourist model.

There is an effort to make Cyprus a yachting destination.

To achieve this goal many marinas with different character and sizes will have to be created so that there are several options for yacht owners.

Also, in our opinion, the creation of many marinas in combination with small individual docks where a boat can park for a few hours automatically creates the infrastructure of an inland route along the Cyprus coastline for yachts.

We are convinced this project, once completed, will be a point of reference not only for Larnaca and Cyprus but also for the wider eastern Mediterranean region, a fact for which we will all be proud.

Panos Alexandrou is the concessionaire representative of the Larnaca Port and Marina development.